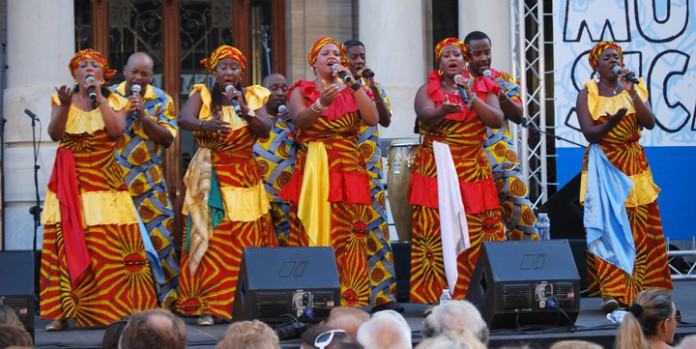 Oxana Ermolova
Distribution ManagerCourtesy of Creole Choir of Cuba
The Grammy-nominated Creole Choir of Cuba performed at Campbell Hall on Nov. 2, captivating the audience with clear-voiced harmonies, infectious rhythms and the jubilant energy of the Caribbean.The choir hails from the Camagüey region of Cuba. While there are state-sponsored choirs in every region of Cuba, this choir sets itself apart by uniquely representing Creole culture. All ten members of the choir are of Haitian descent, so in addition to Cuban songs, they performed songs from their Haitian heritage, keeping alive the Creole culture of their ancestors.“When we are singing a Haitian song, we are feeling a hundred percent Haitian, and when we are singing a Cuban song, we are feeling a hundred percent Cuban,” said musical director, choir member and founder Emilia Diaz Chavez through a translator, when asked as to whether the performers consider themselves to be primarily Haitian, Cuban or both.

The singers of the choir are all formally trained, so they demonstrated superb singing technique. Yet in their performance they also managed to remain authentic to the spirit of the people. Their voices were full of feeling and emotion, and their faces reflected the mood of the song. Emphasizing that movement cannot be separate from music, the performers constantly danced while singing.

The first part of the performance was dedicated to songs dealing with the history of slavery in the Caribbean. During the dancing for this half of the program, the performers kept their feet together, reminiscent of the way shackled slaves would dance.

The second half of the program was a more lighthearted tribute to the mixture of cultural influences in contemporary Cuba. Along with other songs, the performers serenaded the audience with a touching (and slightly accented) rendition of Nat King Cole’s song “Unforgettable.” Certain influences from European choral form and other multicultural forms could be discerned in the group’s performance.

“Just as the language became very dominated by the French language in Haiti and Spanish language in Cuba, I think you [can see] that the music also became European influenced,” said University of California Santa Barbara music professor and ethnomusicologist Scott Marcus.

The entire program was an intriguing combination of three elements that normally do not mix; the songs were in a folk style of singing, yet they were performed by professionals in a Western concert hall setting. This mix was exciting, yet at times confusing. Because of the participatory and inclusive nature of the music, at times the separation of the performers from the audience seemed artificial. To counteract this effect, the group encouraged audience participation, periodically turning up the lights, inviting people to sing along and dance with them onstage.

Although the performers knew no English, they warmly interacted with the audience through gestures and Spanish phrases, proving that a difference in language does not rule out communication.

The audience left the performance appreciative of the group’s energy and spirit.

“It was a lot more lively and interactive than normal, and it was very improvisational,” said first-year biology major Samantha Sobelman. “They really seemed like they were having fun, as opposed to having to follow a strict order.”