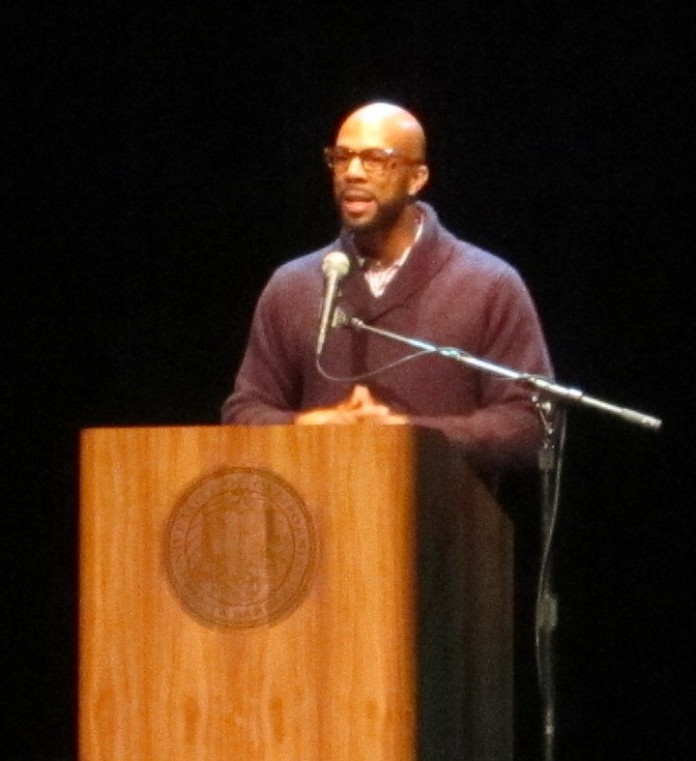 The evening lecture in Campbell Hall on Nov. 15 wasn’t just any regular lecture. All thoughts of conventional stuffy suits and formalities usually associated with college lecturers were out the door when one of hip-hop’s most acclaimed Grammy-winning artists, Common, gave a lecture on his latest book “One Day It’ll All Make Sense,” which is a memoir about his life. The native Chicago rapper shared many funny and inspiring anecdotes to motivate and encourage any who attended his lecture.

Lonnie Rashid Lynn, Jr., mostly widely known by his stage name, “Common,” began his lecture with an impromptu free-style rap, which reminded us why we fell in love with him in the first place- he keeps it real. The audience roared with cheers as he weaved UCSB-related locations into his rhymes, referencing DP, FT and Freebirds.

Veronica Luna, second-year chemistry major, said, “I want to learn more about him and his history. I love his music but I want to know about his life.”

The event didn’t just attract fans from UCSB. A big fan of Common, Jessica Duker, 18, a first-year liberal studies major from California State University Channel Islands, couldn’t miss an opportunity like this to see him in a more intimate and personal setting than usual.
“I think he’s such a genius, and is so interesting. My school doesn’t have events like this,” she said. She even brought a painting she created of him, a recreation of Common’s “Be” album cover that had started out as an art project.

Common is a conscious rapper who fights against injustice anywhere and everywhere through his lyrics. He is one of the most socially aware rappers of our time, with dominant beats, catchy rhymes and a heart to match.

In the lecture, Common retold certain stories and life-changing events from his book to give a resonant emotion to the material. It was definitely worth being a pupil in Common’s class for a day to hearing his voice recount some of his poignant stories.

His lecture felt like a continuation of one of his free-style rhymes. It was so natural to hear him speak from his heart and share his stories in a more intimate setting. This gave the feeling that he was like a friend that you haven’t spoken with for a while, and he was recounting all the things that you missed while you were away.
Common inspired the audience with the wisdom he shared, long-acquired from life lessons. He defined the essence of his entire lifetime as he spoke about what he had learned during his summer vacation after the seventh grade practicing rhymes with his cousin, Ajile.
“My path, my voice, I found it in hip-hop,” Common said.

Common is not only a great rapper but a great writer as well. He has proven himself to be a champion wordsmith, whether it’s inside one of his four books, or through his rhymes.
Common shared his process of discovering hip-hop as a hobby he was deeply passionate about. He even shared the first rap he came up with. This was his secret to his game: being devoted to his passion, and not being in hip-hop strictly for the fame, which he noted is one reason why some artists today have changed the genre for the worse with this mentality.
His mother tried to steer him away from being a rapper, but that didn’t stop him from chasing his dream. He knew his passion for rap and wanted to share it with the world. Eventually, his mother noticed how he made rapping his passion.

“Fast forward, seventeen years later, she says, ‘I heard you made an album. I need a new car,’” said Common, never failing to make the audience laugh while sharing his struggles with us.

“Earlier in the beginning of last year I decided I didn’t just want to be good, I wanted to be great. I wanted to embrace and achieve greatness. It was a process that I went through,” he said.

Sharing his moments of vulnerability and failure, in what many would argue go along with a successful career, he stripped off his reputable high-worth under the dim light in Campbell Hall to show that people still struggle while on the path to success, but the key is having your heart completely immersed in it. He admitted that songs that gave him high critical acclaim, such as “The Light” and “I Used to Love H.E.R.,” were not his best, and made him feel that he could do better. He discussed his love for his album “Be,” which stemmed from his deeper immersion in its creation.

“To really achieve greatness you have to find your path, believe in your path and live it. It makes for a better world when everybody is doing something they’re passionate about,” Common said.

The audience learned a little bit more about the person Common really is, away from the studio, in an intimate setting. His compassion and willingness to inspire others by sharing his most intimate and life changing moments though the creative outlets of rap and text prove that there is nothing common about this rapper.