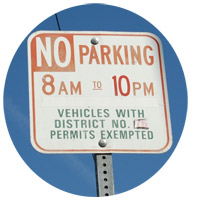 A new night-time only parking permit system aims to preserve ample parking space for both residents and guests of Isla Vista by prohibiting non-residents from legally parking between 3 a.m. and 5 a.m.

The Isla Vista General Plan Advisory Committee convened Wednesday, Nov. 2 and voted that this system will be enforced in the near future at an undisclosed date in 2012.

“The permit rules wouldn’t get into effect too soon, as these things take a long time to get approved and must clear a lot of bureaucratic hurtles before they actually go into place,” said Tim Benson, Associated Students external vice president for local affairs. “Still, the RDA is hoping to get this project off the ground as soon as they can.”

Permits will be required throughout all of Isla Vista, excluding the five individual coastal access parking areas along Del Playa and the commercial core around the Embarcadero Loop, according to the initial proposal.

Residents of Isla Vista will be able to purchase permits on either a yearly or quarterly basis for a currently undecided fee. Enforcement of the permit’s rules will only occur during University of California Santa Barbara’s academic year, which will not include summer sessions or winter break.

Isla Vista’s overcrowded parking space is what led to the decision at this time.

“The saturation of IV streets at almost 97 percent capacity prevents the possibility for redevelopment in many areas,” said Isla Vista Community Relations Committee Co-Chair Megan Shumate. “Although it seems like the IV community is getting by alright right now, I also see cars jammed into driveways, parked in red fire lanes and blocking driveways.”

“We don’t have a parking problem, we have a storage problem,” said Chair of IVGPAC Ken Warfield of a residential parking area.

Benson believes that the Isla Vista community will be split on the decision, acknowledging that the fee will likely frustrate many students.

“The longtime residents of IV seem largely in support of parking reform as they are concerned with students and visitors having to park in the west end of IV, which typically is where non-student residents of IV live,” said Benson. “Students will probably, understandably so, be upset with having to pay another fee in addition to the high cost of rent in IV and the rising cost of tuition; however, there are many positive things that could result from the revenue created by the parking permits.”

“What the hell happened to public parking?” said Drew Hascall, a second-year computer science major. “College fees are going up, [and] it just feels like they’re trying to get more money out of our pockets. I feel like if you live here, you shouldn’t have to pay to park here.”

Guests will only be able to legally park overnight in Isla Vista in areas separate from the aforementioned locations by attaining a guest pass from a resident 24 hours in advance. Guest passes will be available on a nightly basis for a fee.

Permits will only be available to those able to present sufficient proof of Isla Vista residency through the form of a Property Tax Bill or an equivalent record of property ownership, a rental agreement form with a Rental Verification form attached and signed by the landlord, a piece of formal mail such as a utility bill, a driver’s license with an indicated current IV address or a postal mail re-routing label.

Because an initial goal of the proposal was to accommodate some of the Isla Vista guests intending to visit the beach, according to an update from Scott Bull, environmental programs advisor of AS, four coastal access parking spaces will reside at each of the five coastal access points in Isla Vista with four-hour parking meters.

“On weekends, when the surf is particularly good, some surfers will park in front of homes on the residential streets of western IV,” said Bob Keats of the Santa Barbara Surfrider Foundation.