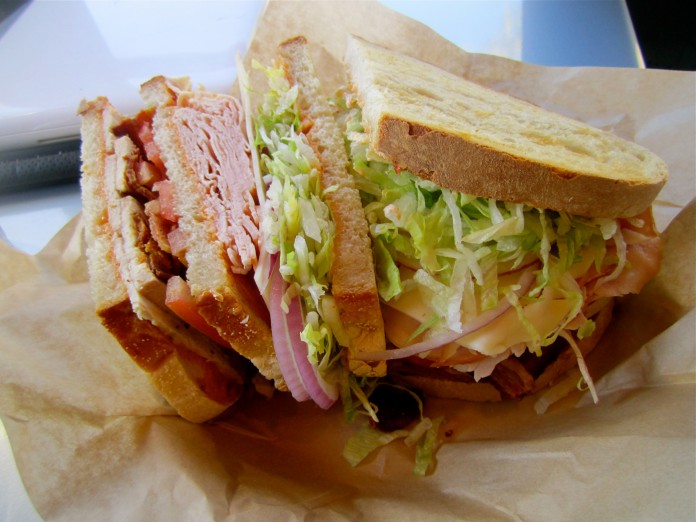 Since its grand opening, hungry students and delicatessen enthusiasts have flocked to Isla Vista’s most recent addition: South Coast Deli. The sandwich/salad/coffee shop hybrid joins a myriad of deli-style joints scattered throughout IV, but their distinctive selection of sammies, paninis, salads and java drinks have already garnered popularity.

The new Pardall location is the fourth in a string of South Coast Delis that are open in Santa Barbara and Goleta.

While St. John says the newest member of the South Coast Deli family is mostly similar to its predecessors, there are distinctions that set it apart as a “college-town” type of restaurant. Some of the foods offered have names that St. John says are only acceptable in an IV-esque environment. Examples include the Mmmm Balls toasted sammie, the Italian Ham Job, and the Italian 3-Way, described in the menu as ‘something to brag to your friends about.’

“A lot of people come in asking for a ham job. We just try to have a little fun, except some people get offended,” St. John said. “We can take those names to the next level in IV. Some people in Santa Barbara have a different sense of humor.”

Beyond catering to the college-student humor, South Coast deli also caters to the college-student budget with a variety of foods that appeal to any palette and price range. Everything on the menu falls under ten dollars and there are create-your-own options. A Walk of Shame special also exists: buy any breakfast sammie and receive a Rolling Rock for only $1.50. In addition to sammies and paninis, there are also various salads, breakfast items and coffee drinks.

“I go here pretty much everyday,” said fourth-year environmental studies and political science double major Ryan McInerney. “I can’t tell if I come here more because I like the sandwiches or just so that I can say that I’ve eaten every sandwich on the menu. I’ve had at least sixteen different ones.”

St. John said he strives to present South Coast as a delicatessen that serves only high-quality food.

“I would say the quality of the ingredients we use, like all the homemade mayonnaises and sauces we use sets us apart,” St. John said. “You can get a basic turkey sandwich anywhere, but our basic turkey sandwich is starting with the highest quality turkey available. And that’s not just IV, that’s anywhere.”

If the quality of the food isn’t enough of a selling point, passersby may also be persuaded to step inside South Coast simply for its inviting atmosphere. From outside, it’s hard to miss the graffiti-style wall that faces outward, scribbled with colorful doodles and messages left by customers. Upon entering one of three sets of doors, patrons are immediately immersed into the deli’s energetic and vibrant ambiance: lime-green walls, accented with colorful paintings, contrast with black-tiled floors and shiny metal chairs and tables similar to those at the DLG. A killer sound system and a slew of hi-def TVs add sleek, technological flair.

“I think the atmosphere is pretty cool and they have a wider variety of quality food,” said Lauren Bennett, a 2011 UCSB biopsychology alumnus.

Ultimately, St. John says that his goal is just to give people another reason to stick around IV.
“We’re not here to take business from other places; we’re here to keep people from leaving IV to go to other places,” he said. “What I want people to get is an experience that, first and foremost, includes a great sandwich or salad. I also want them to get a fun, lively atmosphere and exceptional customer service. That’s it. The food, and the fun.”