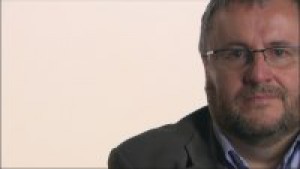 Come this November, all eyes will be on world-renowned researcher Pete Coffey when he joins the UCSB Neuroscience Research Institute to further his work in stem cell and eye research.

The current director of the London Project to Cure Blindness and member of the faculty at the University College of London will bring his expertise to the UC Santa Barbara campus, where he has previously collaborated with other researchers and worked on applications of stem cells in the prevention of blindness.

“It is a really exciting time to be at UCSB because over a period of years, the phenomenal group of people [in the NRI] specifically work on stem cells, both in science and technical therapies. I am excited about collaborating with so many prominent people,” Coffey said.

Coffey’s collaborations with researchers at UCSB has spanned over the course of a few years, so his anticipated arrival will not be his first.

“We have already collaborated for several years. We are both in a project called the California Project to Cure Blindness, which involves UCSB, USC, Caltech, the City of Hope and UCL,” said Dennis Clegg, the co-director of the UCSB Center for Stem Cell Biology and Engineering. “We shared ideas of turning human embryonic stem cells into ocular cells, the retinal pigment epithelium (RPE) in the treatment of macular degeneration.”

One of Coffey’s notable collaborative efforts dates back to 2009, when he worked with a team led by Clegg. Their research, successfully experimented on rats by using cells similar to stem cells, suggested the potential for stem cell-based therapies to treat age-related macular degeneration in humans and was published in the “PloS One” and “Stem Cells” journals.

Coffey’s research primarily concerns age-related macular degeneration (AMD). Currently, AMD is a leading cause of blindness in people aged over 65 in the West. Considering that most cases of AMD are untreatable, breakthroughs in Coffey’s research could have huge beneficial effects in the medical world.

“My research has focused completely on diseases of the eye, especially those diseases which affect the retinal support cells, where the actual mechanism of vision processes,” Coffey said. “The support cells are only a single layer thick. So my idea is to use stem cells to replace the patients’ degenerated cells.”

Coffey has already succeeded in restoring cells that are lost from the diseases with patients’ own cells. However, that method is too complicated for clinical application at the moment. To circumvent that obstacle, Coffey hopes to turn embryonic stem cells into new support cells in the laboratory and reintroduce them to the eye, which will be an easier way to prevent patients from blindness.

“The stem cells are like contact lenses, but in the back of the eyes,” Clegg said. “We have already carried out successful experiments on rats and pigs. Our phase one clinical trials will be conducted in 2014 to see whether it is safe to apply in the clinical treatment of human beings.”

Besides the chance to pursue further collaborations, Coffey said he was motivated to come to UCSB because of the school’s reputable faculty and advanced laboratories for research.

“My own interest is in the visual system in eye diseases. So it is a great opportunity for me to join the Center [for Stem Cell Biology and Engineering], which is the best in stem cells and eye research,” Coffey said.

He also attributed the opportunity to work with Jamie Thomson, the first scientist to produce a human embryonic stem cell and a frequent visitor to UCSB, as another reason to bring his work to the campus.

Apart from his research, Coffey will also become the director of the UCSB Center for the Study of Macular Degeneration and will also work with the Center for Stem Cell Biology and Engineering. He will also become a member of the University’s Department of Molecular, Cellular, and Developmental Biology. While he will work at UCSB as a full-time researcher, he said that he still welcomes graduate and undergraduate students who are interested in macular degeneration treatment to join his research group.

“He is an outgoing and fun guy, [and] we have cooperated for several years on macular degeneration and other stem cells based technologies,” Lincoln Johnson, the co-director of the NRI, said. “He is helpful, social, optimistic and always ready to collaborate.”