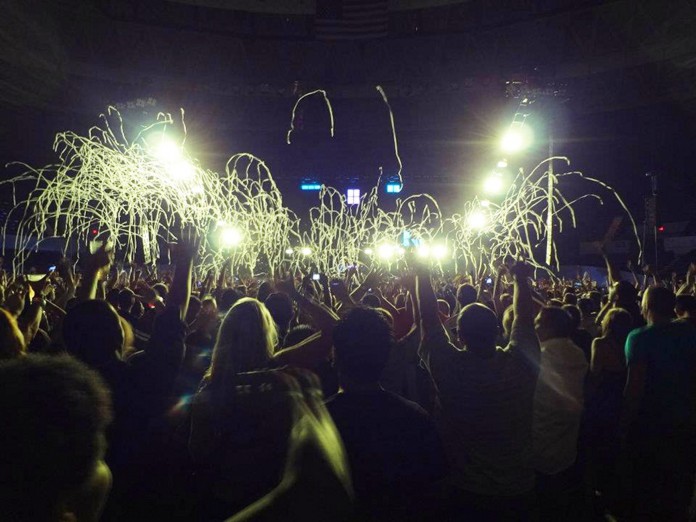 From international destinations like Ibiza to the sin city Las Vegas, DJ Tiesto travels the world to repeatedly deliver mind-blowing performances for electronic music lovers everywhere. On Thursday, Oct. 6, the famous artist, who some claim as the number one DJ, successfully upheld his reputation at our very own Santa Barbara Bowl. During the concerts’ opening moments, the ecstatic crowd was already dancing more wildly than the small venue has seen in its history.
Opener Porter Robinson, a 19-year-old producer from North Carolina, riled up the enthusiastic crowd and kicked off the evening while the sun slowly set. It is no small undertaking to tour alongside Tiesto, but Robinson lived up to the challenge and spun tunes with bold confidence from his debut EP, “Spitfire.”
Before I could even yell “Escape Me,” Tiesto made his grand entrance. The crowd’s energy soared, then never faltered throughout the two hour set.

As is typical of his shows, the entire stage setup contributed to the event as a whole. An impressive light show and smoke effects illuminated the dark sky, while synced to popular tunes such as “Phazing” and his Teagan and Sarah remix “Feel It in my Bones.”
Graphics and lyrics that flashed across the screen pleased the crowd, while everyone sang along maniacally, their voices practically inaudible above the pounding bass.
A suspenseful blackout of the light show on the song “Adagio for Strings” momentarily impaired the crowd’s vision, but not their hearing. Not a single person could be seen sitting down- or leaving for a quick bathroom or beer break for that matter- as each song played was as worthy as the next.
His proclaimed slogan for the evening, “live hard, play hard, love hard, party hard,” was taken to heart by the enthusiastic concert-goers. Positive vibes flowed in all directions when the crowd especially enjoyed the songs “Don’t Ditch” and Avicii’s “Levels.”
“It was my first time seeing Tiesto live and it was awesome,” said fourth-year political science major Kyle Walker. “I go to the SB Bowl all of the time and that was by far the most exciting environment and crowd out of any other concert.”
After the noise ordinance ended the first part of the fun at 10 p.m., Porter Robinson brought his part of the College Invasion Tour to life in Isla Vista. He jumped at the opportunity to play an after show at a party on oceanside Del Playa for those who were not fortunate enough to score a ticket, just before his post-post show visit to Freebirds.
“The crowd at [the house] was insane…at one point every single person starting jumping at one time. It looked like a human wave pool,” said SBCC fourth-year biochemistry major Kirstie Williams.
So although we weren’t raging until 6 a.m. among 5,000-plus other screaming fans, as is typical of a Tiesto concert, those who attended the concert certainly must have ended their Thursday nights with the feeling as if they had been.
“It was without a doubt one of the best nights I’ve had in Santa Barbara yet,” said fourth-year economy and accounting major Shannon Buckley.