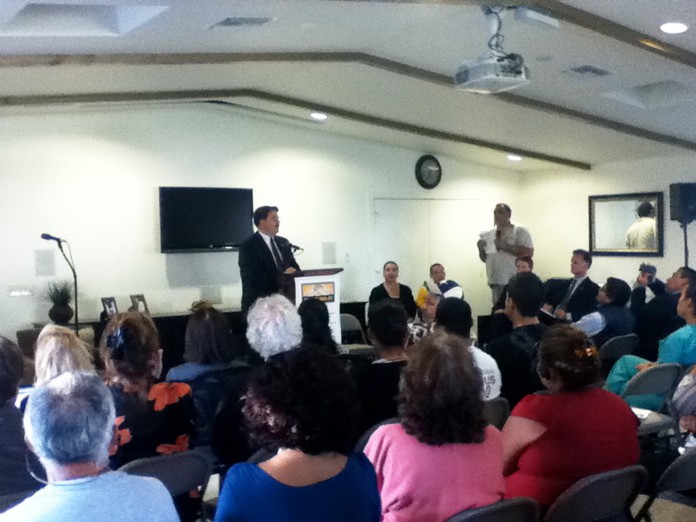 People United For Economic Justice Building Leadership Through Organization, or PUEBLO, a non-profit organization that advocates for the rights of immigrants and low-income families in Santa Barbara County sponsored a community forum with Santa Barbara Sheriff Bill Brown regarding the national deportation program Secure Communities on September 29.

Community members attended the Q&A forum to be more informed about Secure Communities and how the program has impacted the Latino community. Testimonials were shared from those impacted from the deportation program and Santa Barbara law enforcement to create a dialogue between the community and Sheriff Brown.

Sheriff Brown gave a brief overview of Secure Communities, stating it is a federal program managed by the U.S. Immigration and Customs Enforcement. It uses a database system that automatically sends a person’s fingerprints to the FBI and ICE databases, the latter contains information about “criminal alien” status. A criminal alien entails someone who is not a citizen of the U.S. and has committed a crime or someone who was previously deported.  The program’s purpose is to target criminal aliens who have done serious harm.

Brown said it was difficult to quantify the impact of Secure Communities on the local community.

“We’ve had instances where people who have been justly identified as criminal aliens and turned over to federal authorities and deported has a positive impact on our community,” Brown said.  “I think we’re all united in our belief that nobody wants criminals to be in our midst.”

A PUEBLO board member revealed that ICE statistics show that about 70 to 75 percent of those deported out of Santa Barbara County are for minor infractions. Brown responded by stating that the category ‘non-criminal’ is very misleading because there is a perception that those people have been deported when they may not have been.

According to Brown, many of them are held by ICE with a detainer and are taken to a detention center in Los Angeles County and they would be held there for a period of time until it was determined what was going to happen to them.

“Many of them are actually released from that facility without being deported,” said Brown.

Brown also addressed that there were undocumented workers living in Santa Barbara that help build the economy. He suggested citizens of Santa Barbara change the immigration policy in the U.S. in order to more effectively allow workers to stay while protecting our borders at the same time to prevent terrorists.

“We also need to work together and do things like we’re doing this evening, to have the ability to get together and have dialogue because we cannot effectively protect our community unless we have the trust of that community,” said Brown.

Various personal experiences were shared with testimonies ranging from topics of arrest warrants, racial profiling at local high schools by sheriffs, and in general, worried community members afraid for undocumented immigrants having to show proper identification and being deported as a result. This could create dangerous repercussions for them that may lead them to avoid reporting crimes or silence their experiences as victims to local law enforcement.

Mark Alvarado, executive director of PUEBLO, said that the treatment of Latinos by law enforcement is the main issue at the forum.

“When situations arise there is a lot of misconception and I really appreciate the sheriff taking the time to talk to us. We did something positive for the community so everyone has the opportunity to voice their opinion,” Alvarado said.