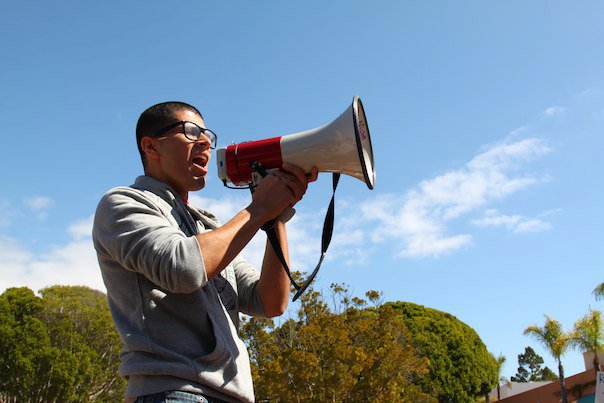 Sitting in a circle outside Sam’s to Go, organizers for Occupy Isla Vista introduced themselves and listed their various skills and connections that would be of use to the movement. Made up of mostly University of California Santa Barbara students, IV residents and some activists from outside, the Tuesday Oct. 18 meeting was the third convening for the Occupy Isla Vista Movement.

This congregation showed more progress than the first two that had taken place the previous week. The enthusiastic participants of the meeting volunteered to do the administrative work of organizing the details of the movement themselves. In the friendly atmosphere where everyone was free to express their opinions, a large variety of suggestions were discussed, such as displaying a large sign about the movement in front of the Arbor or starting class-walkouts. The organizers concluded the meeting in agreement that it was finally time to start committees and set up a central webpage, similar to the Occupy Santa Barbara movement.

Having had only three meetings so far, Occupy Isla Vista participants were somewhat cautious about defining their identity.

“We try to cooperate with the Santa Barbara movement, at one angle take their points, general feelings and applying locally- which SB has done. They diverged a little bit and made their own points, and I think that’s the goals of IV too. There are very specific problems here in the IV community,” Chelsea Mangold, a fourth-year global and feminist studies double major said as she emphasized it was only her opinion.

David Bodek, a participant and fourth-year english major described the Occupy Isla Vista movement as a “Literalist movement,” and one that works together, encouraging anyone to get involved.

“The movement kind of just popped up sometime last week, in response to the Occupy Wall Street movement, just like all the other ensuing movements did,” said Mangold.

According to Mangold, someone started a Facebook page and information spread through word of mouth, conversations with friends and links via social media.

According to the movement’s website occupyislavista.org, they will begin demonstrating on Saturday, Nov. 5 at People’s Park and are planning to keep it going as a permanent demonstration like the many other Occupy movements across the U.S. There will be musical events, a photo booth, spoken word, Free School teach-ins and workshops, film screenings, a march, rally and a general assembly.

“Ultimately students are going to be affected from student loans and increase of tuition fees and unemployment as result as well because we’ve indebted ourselves to this academic institution for the ability to prosper in this economy,” fourth-year history major Michael Schirtzer said. “As soon as we come out, in all of this debt, there’s no arena or way for us to make a living or to pay off the debts we’ve indebted for ourselves.”

“We always want more people to come out, even if the ones with lukewarm attitude,” Bodek said. “I personally believe this is a populist movement where the power comes to people, and we want you to come give a voice to it, especially since it is something that affects yourself. I know some medias are depicting us as angry mobs, but we are rather a group of people coming together to enact change in the world.”

Isla Vista occupiers hold meetings every Tuesday at 10 p.m. outside Sam’s to Go and Sundays at Little Acorn Park at 5:30 p.m.