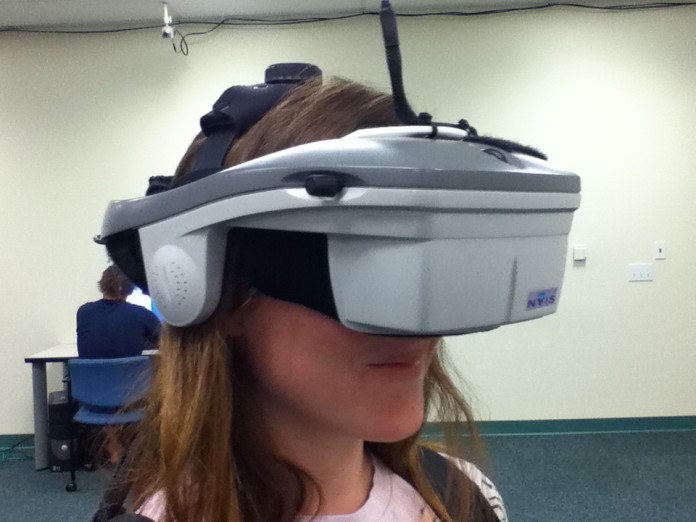 Virtual reality is usually associated with the worlds of movies and video games. So while virtual worlds found in films like Avatar, Tron Legacy and The Matrix may dominate popular perception of what a virtual world is and how it is used, at UC Santa Barbara, virtual reality goes outside the world of entertainment and enters the world of academic research.

In the Research Center for Virtual Environments and Behavior lab (ReCVEB), tucked in its underground facility inside the Psychology East building, researchers are using virtual reality to help answer important questions concerning human behavior. “We study how social interaction and social influence occur in digital immersive virtual reality environments,” says Jim Blascovich, Professor of Psychology and Co-Director of ReCVEB, “The keyword is ‘immersive.’  We put people in the Matrix so to speak, using head mounted displays and sophisticated movement tracking technology.”

Participants, principally psychology undergrads, enter the virtual environments using a Head Mounted Display attached to a backpack powering it, with a tracking device embedded in the HMD to relay position and orientation information. Participants can move around freely within the virtual environment while remaining safely in the confines of a relatively empty research room. The environments that they enter are designed by the researchers to invoke certain behavioral responses that will help the researchers understand and predict behavior based on the specific environmental factors programmed for each experiment. One experimental may have a participant observe a physical confrontation between two virtual individuals and then tested to see how certain environmental factors influenced perceptions or memories of the event; another experiment might confront the participant with an immediate danger, such as a virtual gunman, and observe how they react. “They give us the experimental control we need while allowing us to realistically simulate the environments in which the behaviors we study normally occur,” added Blascovich.

The ability to immerse participants in situations difficult to replicate in real life is one of virtual reality’s many advantages.

“There are a ton of advantages to conducting research in immersive virtual environments. You can make sure that every participant experiences the exact same experiment because programs never get tired, lazy, or bored, they run the program the exact same way every time,” says Kimberley Mangel, a graduate student investigating whether racial stereotypes can cause systematic biases in eyewitness testimony, “Immersive virtual environments are also more ecologically valid, meaning if we are studying shooting decisions, we can actually have people hold a gun and shoot at digital humans, a behavior that is much more applicable to how one will behave in a real life or death shooting situation, rather than hitting a key on a keyboard in response to a still image of a guy holding a gun.”

Experimental control goes beyond variables; with virtual reality, you have complete control of every aspect of the experiment. “The beauty of immersive virtual environments is that you can test participants in any environment that you would like-from Mount Everest to Compton to Mars-and you can keep everyone safe while studying how they would actually respond if you put them in the situation,” added Mangel, “and since a great deal of existing social psychological research are based on people’s self-reports of their past behavior, which are prone to biases, immersive virtual environment technology is a wonderful tool for measuring realistic behavior in realistic three-dimensional environments.”

Experiments can even feel so realistic that they may induce genuine fear responses. “They have other experiments, like one where the researchers put the participants in a world where there is a deep hole dug in the floor and they are supposed to walk on a plank over the hole. The researchers put a real plank on the floor to walk on and when the participants put on the HMD and they look down, they don’t see the real world, they see a hole, so when they are walking over it they feel scared.” says Jonathan Chu, a third year computer science major and architect of the code behind some of the more recent virtual reality experiments.

“I create the environment using 3DS Max which I use to make a 3D modeling environment. There’s a local company called WorldViz, founded by former UCSB psychology graduate students, and they created an Integrated Development Environment called Vizard that I use, coupled with 3DS Max, to create an immersive 3D environment using Python, an interpreted, general-purpose high-level programming language.”

Virtual reality has been helping UCSB conduct research for well over a decade.

“I’ve been doing it for 15 years,” said Professor Blascovich, “but my now retired colleague, Jack Loomis, has been doing it for much longer.” All of that work has resulted in many publications including a recent book called Infinite Reality: Avatars, Eternal Life, and the Dawn of the Virtual Age, recently published by Harper-Collins Morrow. The book, written with Jeremy Bailenson, a former post-doc at UCSB, reveals how “the human brain behaves in virtual environments and examines where radical new developments in digital technology will lead us in five, fifty, and five hundred years.” It also seeks to answer the question, “How achievable are the virtual experiences seen in The Matrix, Tron, and James Cameron’s Avatar?” and leads us wondering at just how far virtual reality has come both in academia and entertainment, and more importantly, where it could take us in the very near future. Pandora anyone?