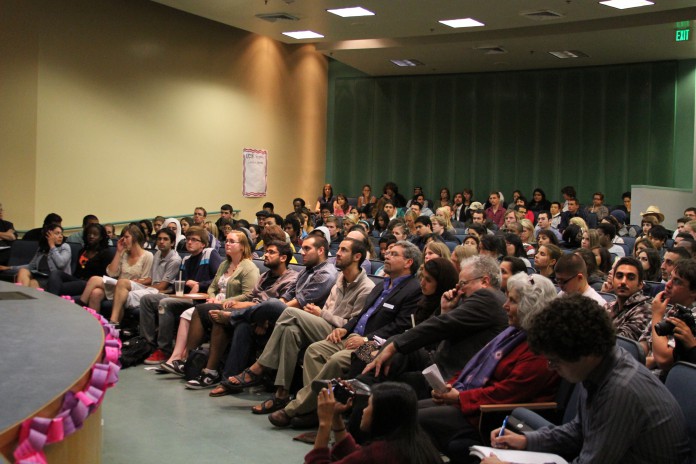 The University of California, Santa Barbara Respect Coalition, a group composed of several campus organizations such as the Campus Democrats, A.S. Queer Commission, and the Muslim Student Association, sponsored “The Alternative: Empowering Our Voices” discussion event held the same evening as David Horowitz’s lecture on May 26.

Second-year Global Studies major student Sophia Armen, along with second-year student Danielle Stevens, led the discussion in hopes of encouraging “ a community discussion” amongst students, as well as defending against the “hate speech” Horowitz presented. The room was filled to capacity with UCSB students, Santa Barbara community members, and representatives from several local news organizations. Students were asked to provide questions for the panelists, to be answered at the end of the individual presentations. Students remained engaged throughout the discussion, clapping and snapping their fingers in support of the opinions presented.

Bazano opened his speech with a short video entitled “A Land Called Paradise” in which Muslim men, women, and children were filmed holding signs with phrases such as “Islam tells me to help the less fortunate, but sometimes I’d rather watch Grey’s Anatomy” and “Broccoli is my personal jihad.” He went on to analyze Horowitz’s logic in accusing the Muslim Student Association of being inspired by and supporting Hamas, an Islamist political party.

Rabbi Goodman followed Bazano’s speech, stating that he told Horowitz the MSA at UCSB “is not what you say it is.” This comment was met with vast applause from the audience.

“[This is a] consistent attempt to divert attention away from the real work we have to do,” explained Lipsitz.

Lipsitz also spoke out against the demonization of Muslim groups and other human beings. However, he believed that audience members present at the alternative event showed him and others how many people supported love more than hate.

Robinson followed, presenting her views on universities and her commitment to human rights.

“Universities are not a safe place for most of us”, Robinson said. Following her assertion, Robinson presented accounts of events involving discriminatory acts occurring on campuses. Robinson mainly focused on opposition to Palestinian groups at UCSB.

Aljawad presented an opinion similar to Robinson’s, saying that Muslims were underrepresented in many Western countries, while the discrimination they faced was not fully acknowledged.

Amar said Horowitz wanted students and society “to be split up in to tiny little groups that are afraid of each other.”

“But we can’t be split up anymore,” concluded Amar.

Samarov closed the speech portion of the event with a non-Muslim student perspective on Horowitz. Samarov said that after conducting his own research on the matter, he’d decided the “MSA does not deserve the accusations” presented by Horowitz and that the group “does not have anything to do with terrorism.”

Questions posed by the audience were answered by several of the presenters and a short spoken word clip was shown embracing the freedom to be one’s self.

When asked about the effects of the alternative event, fourth year Religious Studies major Asma Raja believed there was still a long way to go.

“There are still a lot of racist remnants and hateful images [on-campus],” stated Raja, an opinion expressed by several of the attendees. “I think this presentation will inspire more people to get involved.”