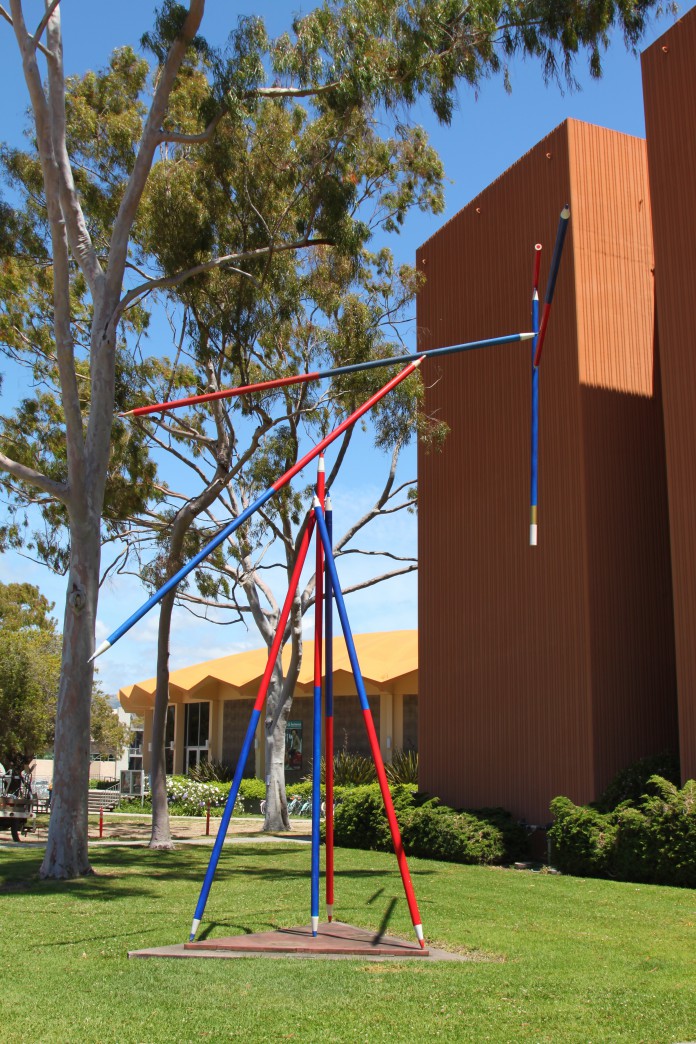 The year 1996 was, to say the least, an interesting year for the United States of America. Republican Bob Dole lost the presidential battle to Bill Clinton, Atlanta hosted the Olympic Games, and the controversial trial of O.J Simpson began in Santa Monica.

But what many people don’t know is that 1996 was also the year that British artist Peter Logan installed the now iconic “Flying Pencils” sculpture on the UCSB campus outside of Ellison Hall. Towering 27 feet over the nicely manicured lawns and shrubbery, “Flying Pencils” is Logan’s end product of ten years’ worth of pencil-orientated sculpturing.  Poised and ready for any sudden gust of wind, the initially catatonic gait of the gigantic piece is replaced by the joyous pivoting of differently sized pencils, carefully balanced upon one another.

The University Art Museum’s Sculpture and Visual Arts Guidebook details the sculpture as “a symbol of the harmony between nature and technology.”

But this description seems, to put it in its mildest sense, a little ambivalent. By the mid 1990s, had the technological advances of mankind really amassed to no more than that of eight enormous blue and red pencil crayons? If this was the finest example of technology the Western World had to offer after the billions of dollars spent on research during the Cold War, we’re lucky nobody told the Russians.

Cynicism aside, if you take the time to do more than just quickly glance at the sculpture, it’s difficult not to be at least mildly impressed by the pencils’ challenging of the rules of physics. The delicacy in which they hang from one another is extraordinary, and proves the structure to be more than just an arbitrary manifestation of a jaded child’s pencil collection. Logan himself refined the pencils several times over the ten-year period before it was finally gifted to UCSB, with kinetic sculptures being an art form he had worked on since 1968.

As with most pieces of modern art, more work has gone into this piece than one would guess from a first glance.

The other campus works that seemed to provoke the most passionate expressions of animosity were the piles of steel bars by Storke Tower and on the lawn between Girvetz and the library.

Not everyone appreciates the abstract nature of this work.

“It looks like a pile of firewood,” added second-year Alex Hair.

Personally, I don’t think the sculptures would look much out of place in 1945 Berlin, which appears to be the look the artist was going for. The sculpture by the library is named “Ruins V” and by Storke Tower “Ruins VII.” The artist, New Yorker Ernest Shaw, is described in the Sculpture and Visual Arts Guidebook as a “self taught sculptor” who in 1978 designed the pieces “in tandem with his interests in Buddhism, meditation and mind/body therapies.”

“We are currently in the process of reassessing the artwork we already have. I think the works would have more of a positive effect on the aesthetics of the campus if they were more noticeable,” she said. “Many of the sculptures, such as ‘Ruins,’ are obscured by trees that have been planted since, so they can’t be seen so well. But unfortunately, it’s very expensive to move them. There’s also some maintenance work that needs to be done on certain pieces. We need to assess our budget.”

Aside from any maintenance or potential relocation costs the university hasn’t paid a cent for any of the modern artwork around campus, according to the Sculpture and Visual Arts Guidebook. Every piece has been bequeathed, endowed, or gifted to the university, either from the artists or from art-affiliated individuals and organizations.