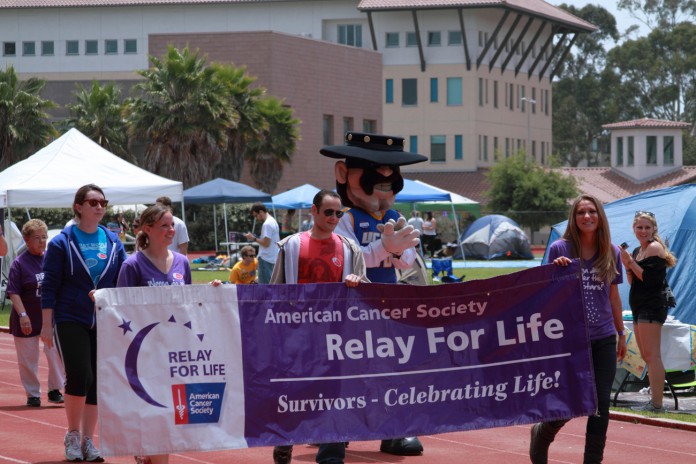 Cancer never rests, and therefore for 24 hours neither did students, faculty and community members who participated in University of California, Santa Barbara’s annual Relay for Life on May 13 through 14.

In addition to raising money and awareness, the two-day, 24-hour camp-out located on the UCSB track included games, activities, live entertainment, speakers and a chance for those who have been affected by cancer to come together and mourn, celebrate and offer support.

A crowd of participants sang “Happy Birthday” to Anna Alter, Entertainment Chair and cancer survivor, who celebrated her twenty-first birthday during the event.

Alter was diagnosed at age three and received chemotherapy until she was six.

“So much helped me through that process and since, the survival rate for Leukemia survivors has gone up,” she said. “Much of the improvements in treatments and research have been done in Leukemia.” She said her roommate, who is currently Relay for Life Co-Chair, got her involved in Relay last year without even knowing Alter was a cancer survivor.

“[Being involved in relay] has made me feel a lot better about things; I used to be involved in Team for Training but then I got busy and stopped, so I am really glad to be back and involved again.”

Alter’s roommate, Polin Simantob, a third-year Communication major and Co-Chair of the event, said they had close to 30 survivors in attendance.

“Sometimes people forget that people our age and younger can be affected by cancer,” Simantob said. “Not only did we have students present, but also family members and friends.”

Each team was asked to select a cancer to represent, as well as a theme and activity to host during the event. Many teams selected a cancer to which they had lost family members or friends while others selected more well-known cancers like breast or prostate cancer because of the magnitude of the disease.

Some of the themes that teams selected included Harry Potter, cowboys, tie dye, the Golden Girls, and Pac Man. Other teams got creative with their names and came up with some names like “Death Cab for Cancer” or “Styrofoam Nachos.”

Simantob said that fundraising for the event was really difficult.

“We are one of the top three Relay for Life groups in California, but it is still hard to get students to commit to fundraising and attending the event,” Simantob said.

Simantob said that although talk and planning for Relay had initially begun during fall quarter, both she and Ashley Evans, the Chair of the event, were out of town and had to keep in touch with committee members via email.

“All the planning was basically broken into three stages,” she said. “The first stage was preparing the committee and getting word out to join. The second stage was getting the teams together and doing publicity. Third was all about fundraising, making sure teams understood what they were doing and other logistical things like entertainment and food.”

But all the hard work seemed to pay off, and many people praised the event.

“They did a good job. The entertainment was good, I liked how they had music all night and that they started the event with the survivor walk,” said first-year undeclared major Kristina Didero.

“I’ve done it before at home which gave me the idea to do it here too,” said Death Cab for Cancer team captain and first-year Biology major Camille Lake. “Relay was really fun.”

Lake’s team consisted of only eight people from her dorm, but all eight raised the $100, and also sold bracelets that stated “Love Kills Cancer.”

Around 9 p.m., the Luminaria ceremony took place during which the crowd gathered to celebrate and remember the lives of those who have lost their battles to cancer. Several speakers shared their inspiring stories, and a slideshow of photos of lost loved ones followed. Paper bags with glow sticks inside symbolized a life lost and were placed around the track, lighting the way for those walking and spelling out the words “hope” and “cure.”

At midnight, walkers changed direction to represent the day when there is a turning point in cancer and more birthdays will get to be celebrated.

“The Luminaria is always really touching,” Simantob said. “It is one of the highlights.”

Brittney Burrows, first-year Marine Biology major, said one speaker stuck out to her in particular.

“He made a good point about knowing where you are giving your money,” Burrows said. “A lot of places will just take money but relay is more active than just writing checks.”

Ideas for improvements for next year include more activities for the entire camp to be a part of and more performers.

Alter said she is sad that Relay is over because this year the committee got a lot closer and had more positive energy, but that the main point of the event was obviously to raise awareness and fundraise.

“Relay is something special because everyone is touched by cancer and events like this make you realize that it affects everyone,” she said.