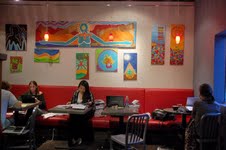 Coffee, Art, Juice, Entertainment: on the evening of May 9, 2011, Caje embodied the meaning behind its acronym at their first life and music event. The collaborative event co-hosted by the SB Media Group featured local artists and musicians for a night of good vibes and great coffee.
Students crowded around the outside tables, sipping their discounted fair trade coffee and enjoying the soothing tunes of Junipero. It was apparent from the get-go that the local talents’ live performances would be as equally impressive as Caje’s usual awesome Indie track list. The impressive four-person band, which only came together in February, played as if they’d been together for years.

While Ben Boyce played an acoustic set of self-written songs next, endangered species artist Francisco Vasquez made the first stroke on his canvas, starting a three-hour live painting set. Inside, free snacks lined the counter and new artwork adorned the walls. Natural beauty artist and University of California, Santa Barbara alumni Mike Yeo began his final painting after two weeks of non-stop work to prepare for the event that would showcase his pieces for an entire month.

The organic and natural atmosphere was representative of the concept behind the independent coffee house, whose employees are devoted to proving that their products are “more than just coffee,” as Caje marketing director and UCSB student Joel Silva explains. “We also bring in entertainment.”

And much to my surprise the “entertainment” he described wasn’t the live music playing in front of me, but rather, the perfect picture of a swan created in creamer on top of my complimentary drink.

“Every latte comes with art and we are really delicate making each cup,” said Silva. “The owner is confident that when people try our product they won’t be dissatisfied.”

Not a single person looked dissatisfied with the entertainment—still-life or live—while other talents, such as Greg Schmitt and Sydney Nieminen sang relaxing tunes while strumming a guitar. Event planners Alexandra Allison and Monica Ratajczak, who are also UCSB students, were pleased with the great turn-out and took this as an indicator to continue such events in the future.

“We advertised with flyers, Twitter, Facebook, and word of mouth,” said Allison. “We’re friends of all of the musicians and we picked people who are local and organic to match the environment of Caje. People have shown a great interest and hopefully we can make this a monthly thing.”

As the sun set and winds began to chill the air, people continued to order coffee and hot tea in swarms and, in doing so, did their part to help alleviate poverty—whether conscious of their good deed or not. Caje promotes environmentally friendly products by purchasing fair trade coffee, helping to promote healthier working conditions, and serving beverages in 100 percent recyclable cups.

Artist Vasquez seeks inspiration from such issues and enjoys creating works that address controversial topics like poverty, deception and politics. His painting of an elephant charging through a forest came to life as Curtis Worden and, later, the band Fierce Grape played a variety of tunes from Sublime covers to original songs written during band members’ freshman year, “Beer Goggles” and “Sunshinin.”

Regardless of if the crowd knew the lyrics or not, everyone fully enjoyed the relaxed evening of entertainment.

“It was one of the classiest shows I’ve been to in years,” said UCSB third-year Biology Ecology and Evolution major Mark Ziman.

Although the live music came to an end at 9p.m., the good playlist didn’t stop there. I started tracking my thoughts as I sat next to others who were committed to finishing homework assignments as Radiohead, The Beatles, and The Doors played on the overhead speakers. One of the two artists asked if I was busy, or if I wanted to “come party” at the Rancho House, complete with a garden, chickens and whiskey, and where he and his friends reside. I had to politely decline and explain that I would be—as I am on a nightly basis—glued to my computer and spot in the red booths that line the coffee shop writing until closing. But that’s what I love about this place—my second home in Isla Vista—I came in because of the atmosphere and left with free coffee and new friends.