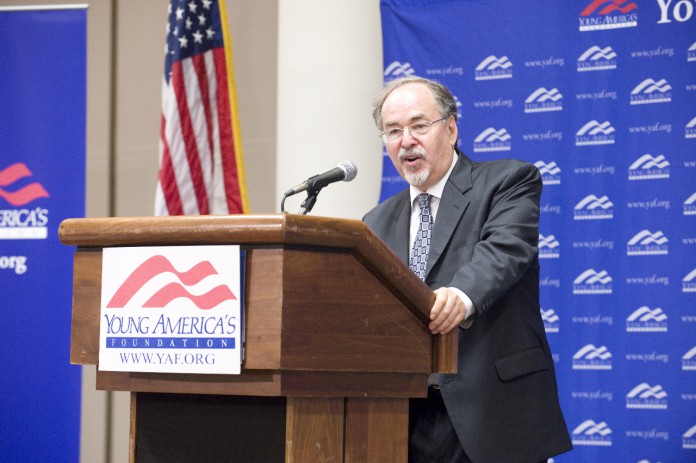 Many students and AS Legislative Representatives expressed concerns about Horowitz as a campus speaker in the past. During Public Forum, second-year Global Studies major Sophia Armen, along with another student, played a YouTube video to Leg Council of clips of Horowitz’s speech at Brooklyn College December 2010.

In the video, Horowitz says the following statements: “no other people have sunk themselves so low as the Palestinians” as well as “Arabs are racists, Jew haters, and can’t live peacefully with others.”

“This is about student fees, so let the speaker speak for himself,” stated Armen.

Ahmed Mostafa, third-year Political Science major, believed that with the recent rise in “Islamophobia” in the United States due to the killing of Osama bin Laden, having a speaker like Horowitz would only add fuel to racial tension for Muslim students at UCSB.

“As a marginalized individual, I feel my safety is somewhat threatened by bringing this individual to campus,” Mostafa asserted. “I don’t want to subject anyone else to the hate that I’ve experienced.”

A controversy over free speech and the First Amendment also emerged. Katie Lieberknecht, a fourth-year Communication and Feminist Studies major and current Chair of Finance Board, reminded Leg Council that it is illegal to deny someone the right to free speech simply because of the content. Internal Vice-President Jake Elwood, a fourth-year Political Science major, also added that monetary funding for a speaker given by the UC system can’t be denied based on ideology.

“We, as an association, have not denied funding to any speaker this year; there is no precedent,” stated Elwood.

Other Leg Council members like Amanda Berry, a second-year Biology major, wanted to emphasize equality and consistency in allowing all speakers for all campus groups to be allowed funding.

“We follow the legal code in almost everything we do,” Berry added. “I think the amount of people that came in today for this one issue is awesome and they should go to the event and express their ideas.”

But fourth-year Sociology major and Legislative Representative Alfredo Del Cid was not so optimistic about an open dialogue between Horowitz and audience members.

“This speaker is going to do what he always does, which is go on a rant,” said Del Cid.

The first motion to fund College Republicans the full $1,470 for security, lighting, audio and visual recording failed to pass 13-10 since it needed at two-thirds majority.

The second motion to fund $1,100 solely for security for the event, which first passed but was then called for reconsideration by some Legislative Representatives who claimed they did not hear the call to objection or thought the motion proposed wasn’t the final one.

At this point, tensions ran high among Leg Council members and audience members who both opposed and supported funding David Horowitz. When the second motion was called again, this time by roll call where each Leg Rep is individually called on to vote, the motion to allocate $1,100 failed 14-8 without the necessary majority.

“I thought this was a compromise,” said Leg Rep Jason Lopez, a third-year Psychology major. “For people that say no, what’s the compromise?”

After much deliberation, a motion proposed by Lopez to allocate $800 for security passed 17-4-1 with a two-thirds majority.

Steven Begakis, a third-year political science major and President of the College Republicans at UCSB said that the AS allocation would promote a safe dialogue between students during the David Horowitz event.

“It promotes the attendance of students with different perspectives on the issue,” added fellow College Republican Matt Borasi, a third-year political science major.

College Republicans will now need to come up with $670 for the rest of the costs, but with allocated AS funding it is more than likely that David Horowitz will speak at UCSB on May 26 at 7p.m. to IV Theater 1.