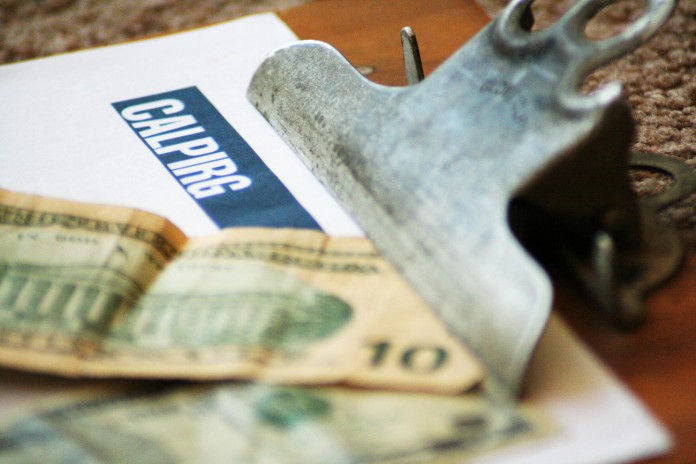 Seeing fellow students wielding a clipboard and a bright orange sticker encouraging others to pledge CALPIRG is not an uncommon sight. For the past 20 years, the organization has asked students for a $5 quarterly pledge. But A.S. Legislative Council voted to increase the fee for new pledges to $10 on May 12.

CALPIRG is the California branch of PIRG, Public Interest Research Group, and is a non-profit organization active on ten different campuses across California. UCSB’s chapter is not the only one to face financial difficulties.

“Three other schools, including Davis, Berkeley and Riverside, have already increased their fees to $10,” said Alex Gomes, UCSB’s chapter chair. “These campuses have seen good results, so we hope to follow suit.”

Acquiring pledges is not just a simple matter of fundraising for CALPIRG. Each chapter must obtain pledges from 20 percent of the student body. If this quota is not met, the chapter will not receive any of the funding.

When CALPIRG was first established in the 1970s, the group received funding through a waivable fee. Just as student health insurance operates today, students had to waive the fee if they did not want to support CALPIRG. In 1992, the UC banned CALPIRG from using a waivable fee, so the group resorted to the pledge system.

Currently, about 24 percent of UCSB students have pledged, generating around $70,000 for the organization. The funds go towards paying the one full time staff member, training student interns and supporting advocates in Sacramento and Washington, D.C. who lobby on behalf of students.

In addition, fees are put towards CALPIRG’s five campaigns. These include one focusing on protecting the ocean and obtaining a ban on plastic bags. Another is working towards a global warming solution. A third centers upon homelessness and hunger at a local and national level. Their energy efficiency campaign provides services such as free energy surveys for homes and buildings. Obtaining affordable education is yet another campaign that hits close to home for many students. They focus on affordable textbooks and saving the Pell Grant, among other projects.

“Through CALPIRG’s campaigns there is the potential to create a real tangible change,” second year Annie Bright said. “They are an important campus organization because their work benefits a diverse array of UCSB students.”

With prices rising across the country, CALPIRG has felt the effects. Their student pledge fees had remained stable since they were founded, but the chapter found that they were no longer sufficient.

“We no longer had the funds to accomplish everything we wanted,” Gomes said. “We hope and believe that people will understand the increase because they know that it is a financially difficult time for everyone.”

While CALPIRG feels confident in their decision to raise fees, some students have a bit of doubt.

“In general, I think CALPIRG does really great work,” graduate student Quentin Gee said. “But some students are a little skeptical about the organization in terms of the transparency of the group’s finances. Because of this, I think it will be difficult for CALPIRG to meet their quota of pledges if they are requesting $10.”

Gee was not the only student to express concerns about the increase.

“I don’t see the extra fee as directly benefiting students,” A.S. Legislative Council member Tiffany Mayville said. “With CALPIRG, I don’t feel there is enough transparency with where the money goes and I don’t think it benefits enough UCSB students.”