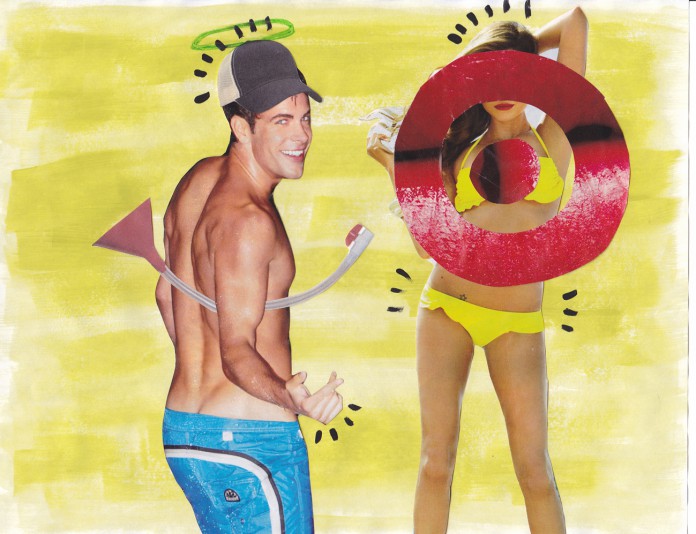 I’m not cut out for Greek life. My manicures always chip before I’m even out of the nail salon. I don’t know how a date party works and the idea of living with sixty girls makes me nauseous.

First of all, I don’t understand the dues. There is nothing I love more than free friends and free alcohol, both of which are not hard to come by in Isla Vista. But paying my rent is hard enough, let alone paying dues on top.

Another thing I’m slightly bitter about is their top-secret way of going about things. I have friends in the Greek system, and they’ll start telling me stories and then suddenly stop and say they “can’t tell me anything else.” Why? What are you doing? Is there something going on here I should know about? It’s almost enough to make me join to figure out this mystery. Almost.

Living in one house sounds too good to be true, which means it must be. And there are the restrictions that come with it, the messes and the inevitable drama. Frats always reek of stale beer, the floors are uncomfortably sticky and there seems to be a growing collection of girls’ undergarments in random places.

Sororities do not have parties, so the cleanliness is certainly better. However, they cannot have male visitors upstairs past a certain time. I’m not trying to jump the gun here, but doesn’t this almost promote walks of shame?

Also, this “big” and “little” and “grand-big” lingo is really too much for me to handle. Maybe my vocabulary is too straight-edge and grammatically correct, but status updates like “OMG I lov3 my big <333 xoxo forever!!!” make me want to head-butt my computer.

The time and effort that goes into being in a frat or a sorority is obnoxiously thorough. Why is it necessary to memorize the first and last name of everyone in your respective house and where they are from? Doesn’t that turn making friends into a standardized test? And if these houses are filled with such bubbly, fantastic individuals, why can’t they include non-Greek lifers in their parties? This exclusion and self-absorption sends me right back to high school, and I thought we all graduated for a reason.

Finally, it amazes me that people are so willing to walk into predetermined stereotypes. Personally, I’d rather be known for myself as an individual than three letters in a different language strung together. Greek lifer’s respective frats and sororities nearly always appear as a sub-title.

Worse, these sub-titles tend to have some negative connotations. Delta Gamma has been referred to as “dick grabbers,” Alpha Phi has been known as “all for free,” and Lambda Chi “rammed a guy,” just to name a few. These sexually inappropriate acronyms and such are not something I would ever want to be associated with.

A UCSB student who wishes to remain anonymous gave Greek life a shot.

“If I ever had the chance to do it again, I would pass on the opportunity,” she said. “After going through the pledging process, I had gone through weeks of being pushed to my limits both by physical testing and emotional endurance, both of which took a toll on how I performed academically.”

Greek life comes with a lot of objectifying, harmful behaviors and expenses. I’ve seen a lot of people get consumed by the Greek life, and end up not doing well in school. Also, some of my own friends have completely detached themselves from any other social circles not involving Greek life. The lure of constant partying and endless hookups sounds more glorious than it actually is. Like anything, it gets old after awhile.