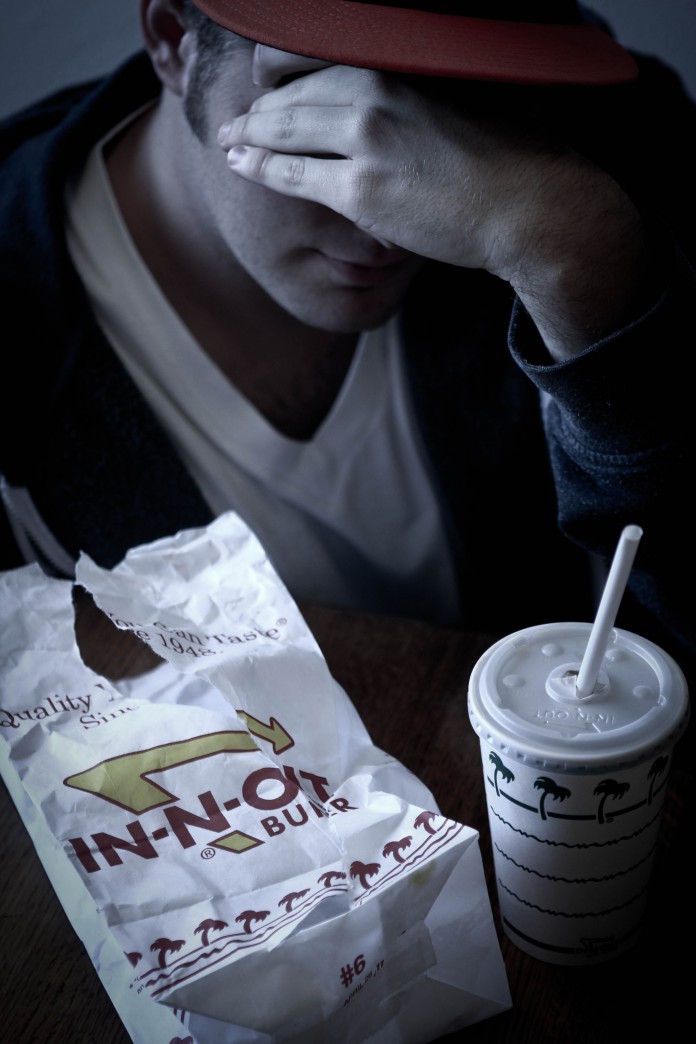 Two separate studies conducted in Spain and the United Kingdom found a link between the consumption of fast food and increased rates of depression.

A study by the Spanish University of Las Palmas de Gran Canaria, led by Professor Almudena Sánchez-Villegas, tracked the diet and lifestyles of 12,000 volunteers over a period of six years. Professor Sánchez-Villegas found that “[p]articipants with an elevated consumption of trans-fats presented up to a 48 percent increase in the risk of depression when they were compared to participants who did not consume these fats.”

Prior to the study, none of the 12,000 volunteers suffered from depression. But after data from the study was collected, 657 people became new sufferers. Many of those new sufferers had processed foods as a regular part of their diet.

In the study, 3,500 volunteers were split into two groups, each with a different diet assignment. One half of the participants adopted a diet of largely whole foods, such as fruit, vegetables and fish. The other half ate mainly processed food, largely consisting of processed meat and fried food. The researchers found after five years of careful monitoring that those who ate mostly whole foods were at a 26 percent lower risk of future depression than those who ate lesser amounts. In contrast, those with a diet high in saturated fats and processed foods were at a 58 percent higher risk of depression.

“This study adds to an existing body of solid research that shows the strong links between what we eat and our mental health,” said McCulloch. “Major studies like this are crucial because they hold the key to us better understanding mental illness.”

The current number of depression sufferers in the world is around 150 million, and this number has increased in recent years. Scientists from the Spanish study have pointed to the increased popularity for mass produced fast food over the past 30 years as a reason for the surge. There is concern for those who live in areas where there are large concentrations of fast food restaurants or who are out of reach of fresh food.

“I’m sure there must be some truth to the whole ‘you are what you eat’ claim,” said Brian Smight, a fourth-year Film major at University of California, Santa Barbara. “If you keep pumping your body full of unnatural foods, it’s bound to have some kind unnatural, negative effect on you. If you go into any fast food restaurant and actually look at what goes into the food there, it’s packed full of ingredients you can’t even pronounce. It’s got to all count for something.”

A 2010 report published in the Archives of General Psychiatry claimed that countries with a Mediterranean diet rich in fish, fresh vegetables and olive oil encountered lower levels of depression than other Western countries.

Other foods that have been proven to be beneficial for mental wellbeing are dark chocolate and whole grain cereal.

A recent study conducted by researchers in Switzerland, published in the Journal of Proteome Research, found that consuming small amounts of dark chocolate, around 1.4 ounces, can lead to lowering of the stress hormones cortisol and catecholamine in the body, which reduce feelings of anxiety.

Health and fitness blogger Sarah Jio said that whole grain cereal is rich in vitamin D, which helps to produce serotonin, a “feel good hormone” that can help you feel “relaxed and happy.”