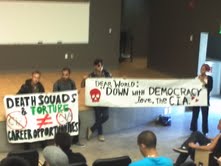 The Central Intelligence Agency came to UC Santa Barbara to inform students of the career opportunities in its organization on Wednesday, May 11 at 4p.m.. A few minutes into the meeting, a group of students came in through the side door at the front of the stage carrying signs that said “Death squads and torture does not equal a job opportunity” and “Dear world, down with democracy. Love, the CIA.”

The three CIA recruiters at the front continued uneasily, but the heckling and jeering of some students who had come in through the front entrance earlier interrupted them. When the recruiters and others in the audience said that they were being rude for interrupting, they asked, “Does the CIA interrupt people’s lives when they torture them?”

“We shouldn’t ignore the torture just because it’s taking place far away from us,” said one of the graduate students who helped to organize the protest but wishes to remain anonymous. “Craig Murray was a former CIA agent who became a whistleblower and exposed everything. They were burning people with oil, trapping kids with insects, drugging people.”

The recruiters pushed past the initial interruptions and went on to explain how the CIA gathers important information for the president to base his decisions on, but they were interrupted again with “How do you get this information, through torture?” At this point a student stood up and walked out, saying, “It’s not worth it.”

“Torture isn’t effective in getting good information; they’ve done studies,” said the anonymous graduate student who I talked to outside of the event. “WikiLeaks informed us of a ton of illegal activity and faulty CIA reports, but now they are torturing [PFC] Bradley Manning for letting it out.”

The recruiters began asking themselves whether they should continue or call the police, and that threat allowed them to continue without further interruption. A few minutes later a police officer walked in through a side door to see the situation, then walked out again promptly. At least two campus security officers and three police officers had surrounded the building. I had to leave a bit early to stand in solidarity with The Bottom Line at the Legislative Council meeting, but I was still able to interview one of the organizers, who was talking with two police officers when I approached him.

“It’s a question of whether your duty as an officer conflicts with your morals, what do you do then?” said the protester. The officer nodded his head and walked away as he said, “I understand what you’re saying.”