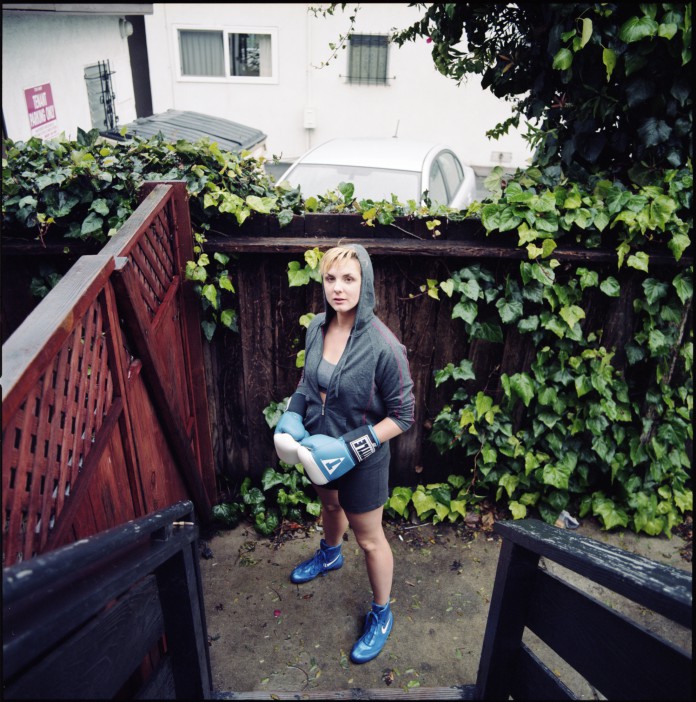 Guttural, breathless sounds of an athlete working out echo through the air and two heavy bags sway ominously. A full-scale boxing ring waits in the next room, and one is surrounded by the faces and up-turned fists of ten boxers. One might not think that something as traditionally dainty as art could be paired with a sport as physically violent as boxing, but UC Santa Barbara graduate art student Desireé D’Alessandro does just that in the exhibition, Art in Athleticism: The Form and Physicality of Boxing.

D’Alessandro, in collaboration with undergraduate art major Raymond Douglas, put together a show that utilizes both artistic and physical means to conjoin the artist’s passions in a fluid and provocative manner. The exhibition took place in the two-room gallery space in Building 479 (a.k.a. The Red Barn).

The first room featured photographs of the student boxers involved in the exhibition, while the second room was notably sparse except for the full-scale boxing ring that filled the majority of the space. The exhibition lasted April 18 through April 22. Visitors even got a chance to watch the athletes train in the gallery space on Tuesday and Thursday from 5:00 p.m. to 6:00 p.m.

“When you walked in all you see are the photos of the different boxers ready to fight you then you see the boxing ring and it made me feel like I was surrounded by them and they were pushing me towards the ring to fight!” said Julia Calderon, a second-year Art major at UCSB.

As a grand finale, there was an exhibition bout held during the closing reception on Friday, April 22 in which several student boxers, including D’Alessandro, fought it out in the ring in what could be described as a beautiful dance of jabs and uppercuts that left the fighters sweaty and the viewers entranced.

When I entered the gallery space, I immediately felt the excitement and passion D’Alessandro must feel for the sport. I could not help but admire the power and poise exhibited by the training boxers. When speaking to D’Alessandro, her enthusiasm for both her art and her sport show through.

“The workout, the contest, the spectacle, and the drive all fascinate me,” she said.

In an effort to improve her overall fitness, D’Alessandro discovered Duke’s Boxing and soon fell in love with the sport.

“The psychological changes that accompanied the physiological ones were remarkable and I soon discovered my perspective on my artistic practice transforming as well,” she said. “Moving forward, I began to immerse myself even deeper in the local boxing community and began contemplating the integration of boxing in to my art and that’s how the show was conceived.”

Over the years, the UCSB Art department has hosted some pretty unusual shows, but the concept of this exhibition is something that it has never seen before. Having actual boxers training in the gallery space along side the more traditional aspects of the show is highly unconventional, however, it acts a perfect gateway to connect the artistic physicality of both mediums. The exhibition expertly utilizes local resources to feed the overall concept.

The majority of the supplies D’Alessandro used to construct her boxing ring, including lumber and rope sides, were found locally and there were contributions from UCSB’s Drama department as well. All the student-boxers were locals, and many live in Isla Vista where most of Douglas’ photographs were taken. Even the aged gym the exhibition takes place in offers the perfect setting for athleticism and art to cohabitate.

While most people may be inclined to see the formal artistry in something like painting and even ballet, boxing does not usually come to mind as an art form. But D’Alessandro and Douglas’ collaboration works to showcase boxing as a noble art as well as traditional art as a physical being itself.