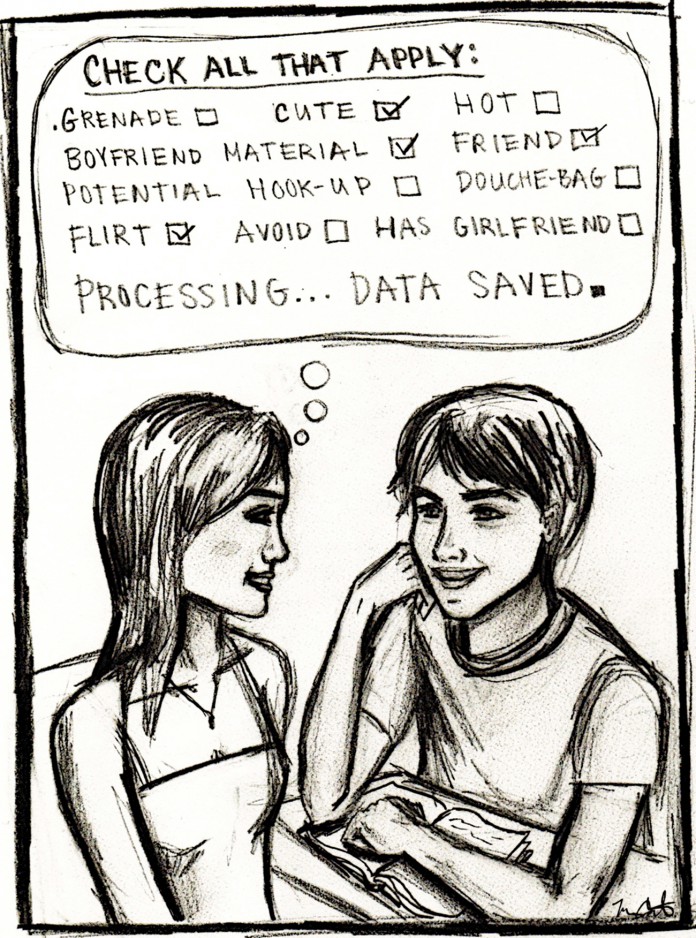 “It’s college, bro,” is the number one douche bag justification for any mishap, or “mis-hookup” that occurs in the wonderful world of Isla Vista. While this is forgivable reasoning perhaps for drinking too much, it doesn’t exactly hold true for cheating on your significant other.

I’ve been cheated on enough times to realize that a) I tend to seek out polygamists and b) it most certainly takes two to tango. I used to assume that the guys happened to be in the wrong place at the wrong time with a girl who did not have the word “no” in her vocabulary. Although sending hate mail to the girl a boyfriend cheated with may be self-satisfying, it does not excuse the guy’s role in the situation.

The excuses from the cheater that come thereafter are nearly always the same. They involve drinking, not remembering what happened, or some combination of the two. While this may have flown in high school, in college it just doesn’t cut it for me anymore.

There’s a fine line between “blame it on the a-a-a-alcohol” and just plain being a jerk. The gray area between blaming it on the college experience and who you actually are as a person is quite narrow. When do we all wake up and realize it’s time to hang up the old beer goggles?

Don’t get me wrong, I’m all for having a good time, just not at the expense of others. No one particularly wants to date someone that gets so drunk they (all too conveniently) “forget” they’re in a relationship.

But often, the cheater is taken back after a simple slap on the wrist, for the most part remaining completely unscathed, with an extra-added free notch on their belt.

After watching this happen countless times and living on the unfavorable end of the cheating relationship, I decided to cheat—consciously. I was not seven shots deep but was instead sitting in math class and thought, “Hey, tonight I’m going to cheat on my boyfriend.”

It turns out, people really do not care if you are in a relationship or not. Harmless flirting does not wholly exist. Even after informing guys I had a boyfriend, they continued as if it was as irrelevant as my favorite color.

I think we both had the same thought: If you have a boyfriend then why are you flirting with me? Clearly I didn’t care, so why should they take it upon themselves to be the saintly ones? Needless to say, it was easy to cheat.

But it sucked. The guilt that came with it was almost worse than being cheated on. I will never cheat again, and I certainly don’t recommend it.

Yet so many people cheat, and do it well into their 20s. “He’s just a frat guy,” or “She’s ‘that girl,’” doesn’t exactly translate in the real world. “I want a divorce,” is more along the lines of what one will hear.

The people who usually cheat seem easy to pick out of a crowd. It’s the girls in tight dresses, toppling over drunkenly in their heels. It’s the guys rocking frat tank tops and taking far-too-generous handle pulls.

Granted, judgment in IV falls into a double standard. When I see a girl in a skimpy outfit talking to a guy, I assume she is throwing herself at him. I completely overlook the fact that maybe it’s just one of her friends and she is having a simple conversation. Not to mention the fact that I wear heels everyday. And I’m not cheating every time I drink.

This misjudgment happens because it seems unfathomable that guy-girl relationships can ever remain platonic. Mistakes can happen, yes, but if “mistakes” are the only decisions you’re making, I think it’s time to re-evaluate. Some mistakes are forgivable, but cheating is something that is very difficult to stop once you’ve started.

Cheating is exciting because it’s not supposed to happen. But such kinds of behaviors can follow us if we practice them too loosely. Cheating is something that is easy to repeat and easy to brush off as just living up your adolescence.

But what is going to happen if you’re tempted once you have a spouse and family?

College decisions can really make or break our future because they essentially shape us as human beings. Don’t be too quick to brush off mistakes as a “one time thing” because they can follow you.

What it comes down to is as simple as this: If you are going to cheat, don’t get into a relationship. What happens in IV certainly may not stay in just IV. And trust me, word gets around here.

Top 10 Places to Visit In and Around Campus