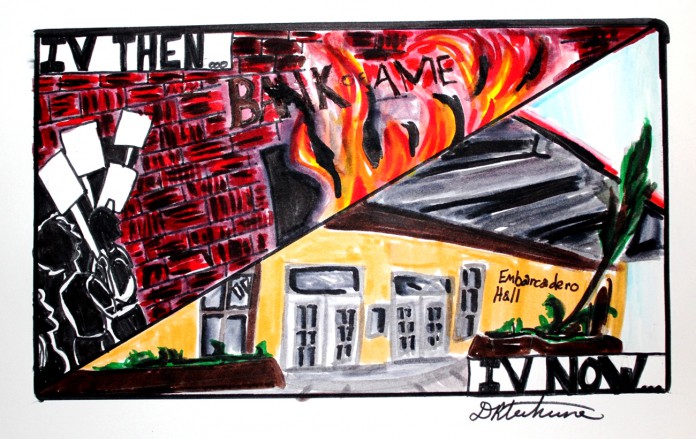 February rang in the forty-first anniversary of the Isla Vista riots, an incident of the 1970s that casts a shadow on UC Santa Barbara culture. Comparatively, Isla Vista seems to fall a little short today.

The crowning moment of the 1970 riot occurred when activists looted and set fire to the local Bank of America, which was located where Embarcadero Hall stands today. There was a general feeling of unrest among Isla Vistans after several locals were arrested for protesting and riots erupted the following day. People set fire to trash cans, vandalized various realty offices in the area and infamously leveled the Bank of America.

Many think the crucial catalyst to the destruction was when a man named William Kunstler visited the UCSB campus. Kunstler was lead attorney in the very high-profile “Chicago 8” legal case concerning the prosecution of anti-war activists, and he came to UCSB to speak about the trial to an audience of roughly 3,000 in Harder Stadium.

Police anticipated that the speech would intensify feelings of unrest, so local law enforcement engaged in a technique called “saturation patrol”—placing police squads at virtually every street corner.

As the attendees of Kunstler’s speech walked back into Isla Vista, one of the police units singled out a 22-year-old student, Rich Underwood, for arrest. Underwood was carrying an open wine bottle that police mistakenly believed was a Molotov cocktail, and they proceeded to physically beat him before arresting him.

John Edwards, owner of John Edwards Hair Salon in Isla Vista, was a student at Santa Barbara City College when the riots broke out. He tried to get into Goleta to see the riots, but police had barricaded Isla Vista for both entry and exit.

“They brought in police forces from Los Angeles to enforce the rules and laws,” Edwards said. “They beat people up for no reason, and a lot of law suits were filed afterwards.”

“This is our community and this occupying army must be driven out,” Knell said at the time.

The riots ended three days after the onset when then-Governor Ronald Reagan sent in the National Guard to occupy the town. Two other riots followed in April and June of the same year, although those are often overlooked.
Looking back on the turmoil makes the Isla Vista of today feel a world apart. Now, those who talk about “fighting the man” are few and far between, and that sentiment rarely manifests itself in a tangible form. If the infamous “bubble” of Isla Vista was characterized by radical activism a mere 30 years ago, why is it so markedly apathetic today?

Even if our community as a whole has lost its activist spirit over the years, there are still a few outlets that carry on the fighting spirit, most notably through a number of university student groups. Campus Left is one of these organizations, and the group has sponsored various talks, sit-ins, protests, and other events both on the UCSB campus and in the surrounding community. The group seeks to organize mobilization of students and workers, champion economic and social justice, and encourage a critical analysis of capitalism.

Dyne Suh, student President of Campus Left, disagrees that Isla Vista activism is dwindling. She believes that it may seem to have become less out in the open compared to 30 years ago simply because technology has given us better means of communication. Why would the masses congregate to burn a bank down when they can join a Facebook group or express their opinions via blog or Twitter?

“There is a whole lot of student activism out there, just as much as ever,” Suh said. “Student activists have learned from the backlash of the ‘70s, how we must conduct ourselves differently so that we may communicate our message and spread awareness without anybody getting hurt.”

In looking back on the Isla Vista riots of the ‘70s, perhaps we don’t have to resign ourselves to believing that we have since fallen victim to apathy. Perhaps the spirit that we are “one important voice in a crowd of many,” has simply taken on a different form.

I challenge the Isla Vista community to further explore and embrace these new channels of activism because in a time when massive tax cuts heavily affect university students, the last thing we should be is apathetic.

If we don’t stand up for ourselves, who will?