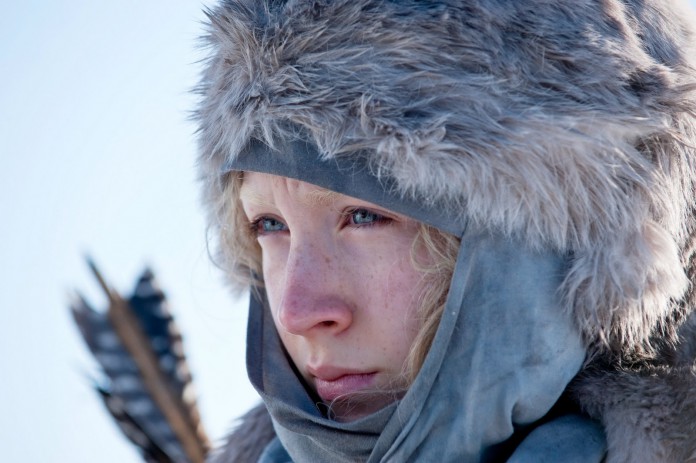 The Good: Saoirse Ronan shines as Hanna, who is a perfect feminist heroine. She is never sexualized, kicks ass without always relying on firearms, and is a very intelligent and independent young woman. Hanna’s innocence and purity are endearing, but she becomes a truly frightening force when she reacts with violence. The film also provides an almost philosophical commentary on childhood and adolescence, which is topped off with a bloody brawl in an abandoned playground. Because the film was shot on location, the cinematography is a visual feast. It features a number of cultures and languages which keeps the action fresh and interesting. The variation of settings, such as an icy forest, a sprawling desert marketplace, and a colorful cottage all enhance this atmospheric quality. There are also many scenes in which the exact location is unclear, and this mimics Hanna’s own perpetual sense of being emotionally lost. Many of these eccentric settings help to blur the line between fantasy and reality, placing the audience in a modern-day fairy tale. The fight scenes, though highly stylized, are well executed and do not feel choreographed. The supporting characters are all excellent as well — especially Jessica Barden as Sophie, the pop culture-obsessed foil to Hanna. Although the film is quite dark and violent, there are plenty of humorous scenes that serve to enhance the characters rather than simply entertain. Lastly, the soundtrack, an original score by The Chemical Brothers, is nothing short of epic. It’s an amazing pastiche of pulsing beats, music-box bells, and lullaby vocals, and I personally cannot wait to get my hands on it.

The Not-So-Good: Like most action films these days, Hanna suffers from a few action movie clichés. For example, even the most basic 6-round pistol is suddenly equipped with infinite ammo, and I don’t think there was ever a shot of a character reloading. There are a few instances of the dreaded “shaky cam” that I found to be a bit extraneous, and many of the scenes went on for too long. This isn’t too surprising because all of Joe Wright’s previous films are very slow-paced, but this just doesn’t translate well for an action flick. There is even one fight scene that is shot entirely in slow motion, and I personally found it tedious rather than suspenseful. I also found a few scenes to be a bit too obvious and even predictable, for example, there is a scene in which a character is being followed and the wall behind the character is spray-painted with dozens of eyes. A few of the supporting characters also felt a bit two-dimensional, in particular the villainous characters, and it seemed that they were tailor-made for the audience to hate them. This, however, could have been intentional, as Hanna herself could also be considered villainous.

The Weird: Hanna seems to take place in an alternate universe where police do not exist. People wave guns around in public, fight and bloody each other up, and no one in the outside world seems to notice. Characters also seem to be able to travel hundreds of miles on foot or by swimming, magically appearing in their chosen destinations almost instantly.

The Verdict: Hanna is easily one of the best films I’ve seen in the last 2 years, offering a new twist on the classic chase-centered plot. It is also one of the freshest films playing right now, as it is not a sequel, remake, or based on a book. The acting, action, cinematography, and soundtrack are all top-notch. The writing is nothing special but it certainly isn’t brainless, and many of the film’s themes are worthy of discussion. Hanna is a clever action film that offers more than just mindless fighting, and for that reason I think it is definitely worth checking out.