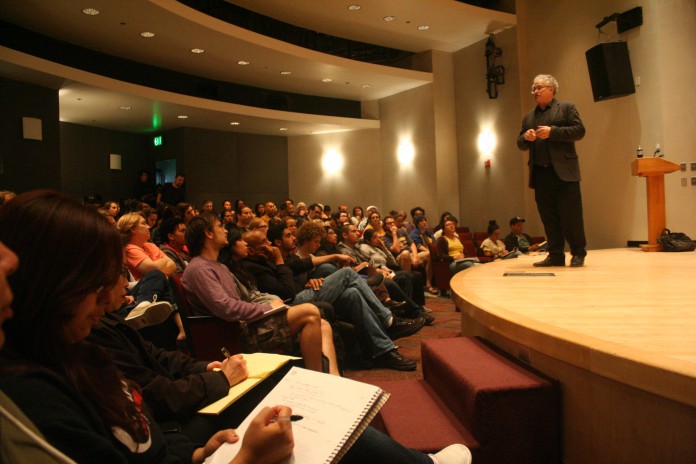 At 6:19 p.m., there were only two seats left in UC Santa Barbara’s Multi-Cultural Center lounge and by 6:20, the line outside the door made it apparent that a change of venue was very much in need. On Tuesday, April 19, Black Studies and Sociology Professor George Lipsitz drew a crowd for his talk on his newest book, How Racism Takes Place. The book, released in March of this year, looks at how an individual’s location has a huge impact on their opportunities in education and employment.

During the talk, Lipsitz explained that this book was his attempt to break the fatal coupling of race and place that exists in our society today. Many elements of our daily lives that appear to be race neutral may in fact be creating disadvantages for minorities.

Lipsitz described one chapter in his book about the new football stadium built in St. Louis for the Rams football team. While this task seemed harmless enough, in reality, it took valuable tax dollars away from desperately poor black children of the area and put the funds towards financing the stadium for the already fairly affluent team.
According to Lipsitz, this type of contemporary racism often goes unnoticed but happens all the time. Take a look at your own gated neighborhood, country club or high school and it just might make sense. Lipsitz points out that the racially segregated America we live in today is not merely coincidence, but a direct result of past discrimination.

“The lecture was really eye opening and forced me to look at my life from a different perspective,” said second-year Biopsychology major Christina Cobos.

Cobos found the lecture important not only because of the content, but also because a professor took the time to interact with students and the community outside of the classroom and took it upon himself to work towards a discrimination solution.

“Since our university prides itself on being a research institute, it’s inspiring to hear professors share their outside research,” Cobos said. “That type of insight helps students realize that there is a larger world than one where the biggest threat is a bike crash in front of Storke Tower.”

Cobos wasn’t the only student to become inspired by Lipsitz. Second-year Sociology major Taylor Singer also attended the lecture and was shocked to realize her own Isla Vista community was guilty of participating in spatial racialization.

“I received a rude awakening when the I.V. Tenants’ Union spoke up and shared that Conquest Housing had kicked out families in order to rent out their apartments to students at much higher prices,” Singer said.
But don’t despair, there is still hope for the future.

“If there is a problem, there has to be a solution,” Lipsitz told the crowd. In his concluding remarks, he emphasized the importance of education and awareness.

With long-term goals to conquer this issue in our own community, the Isla Vista Tenants’ Union holds meetings every Tuesday at 5 p.m. and works towards minimizing the amount of indirect racism in our community.

“The Isla Vista Tenants Union exists as a result of students, workers, and other members of the community uniting against the blatant gentrification of Isla Vista in 1998. Our services are open to the Isla Vista community and our recent work in lobbying for tenant friendly legislation (ordinance 4444) reflects that,” said Omid Niroumandzadeh, a fourth-year Biology major and chair of IVTU.

The eye-opening book, How Racism Takes Place, is available online and in bookstores today.