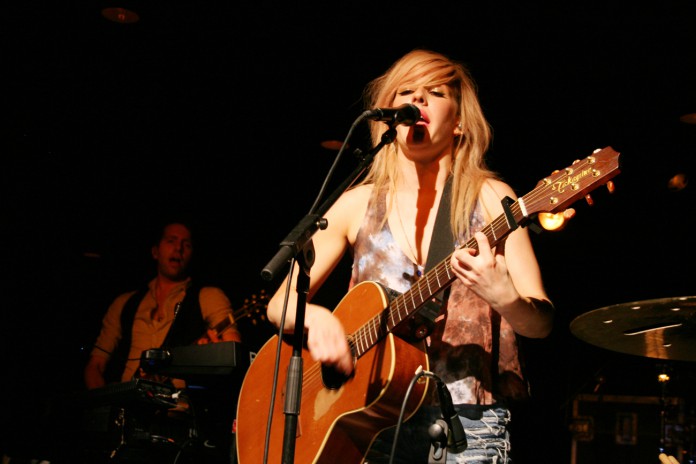 Straight from Coachella and still energized, British artist Ellie Goulding stopped in Santa Barbara to perform for a community that was familiar with her songs via dubstep remixes. The concert was UCSB’s Associated Student Program Board’s (ASPB) first (paid) sold-out concert of the year.

On the night of Monday, April 18, when students should have been frantically writing last minute essays and studying for midterms, about 800 people decided that putting down their textbooks for a few hours to listen to electro-pop music in the UC Santa Barbara Hub would be worth it.

“ASPB tries to bring artists to UCSB who appeal to a diverse crowd. We think it is important to invite female artists to our campus, especially because most of our performers this year have been males. She is one of the fresher artists on the rise so it’s nice to see her when she’s making a break into the industry,” said AS Program Board Commissioner Rae Yamamoto.

The moment the concert began, the audience was already dancing, and there was no awkward swaying of a so-so opener. The Knocks, a duo of music producers from New York City, energized the crowd with their dance remixes of popular songs, such as “Watcha Say” by Jason Derulo and “Funk Soul Brothers” by Fatboy Slim, and original dance music that couldn’t let the crowd stand still. They were a great opening act that got the crowd even more excited to see Ellie Goulding.

Goulding showcased her wide range of musical abilities and talents as she played drums and guitar and danced around the stage singing every song from her album brilliantly. She sang songs that were acoustic and romantic, such as “The Writer,” “This Love,” and a cover of Elton John’s single “Your Song,” as well as other songs that were fun and upbeat, like her hits “Under the Sheets,” “Lights,” and “Starry Eyed.” By singing from a variety of genres, Goulding’s music appealed to a broad range of fans.

“It’s good to have different fan bases. Some people only listen to my acoustic stuff and some listen to my pop songs. Someone called me the ‘Queen of Dubstep’ the other day. I quite like that. It’s kind of cool,” said Goulding. “I sing about my observations and I do want them to be of some sort of significance. If people are inspired by my music, then that’s a bonus. I just want to make music that people will enjoy.”

All around me throughout the night, the audience sang along at the top of their lungs without shame and waved their hands in the air under the flashing lights. But on my left, girls that smelled of alcohol danced obnoxiously, crashing into and annoying everyone around them even when multiple people tried to make them stop. Despite this little discrepancy, the concert was still great.

“I’ve been listening to Ellie’s music for six months now so I was really excited to see her live. I love that her songs are so different from anything else you hear on the radio. I really liked all of the energy from the crowd tonight,” said Helen Yu, a fourth-year Global Studies major at UCSB.

Was it worth it to neglect my studies during midterm week to be squished by drunken girls, to dance until my legs ached, and to be entranced by Goulding’s voice for hours after I left the Hub? Definitely.