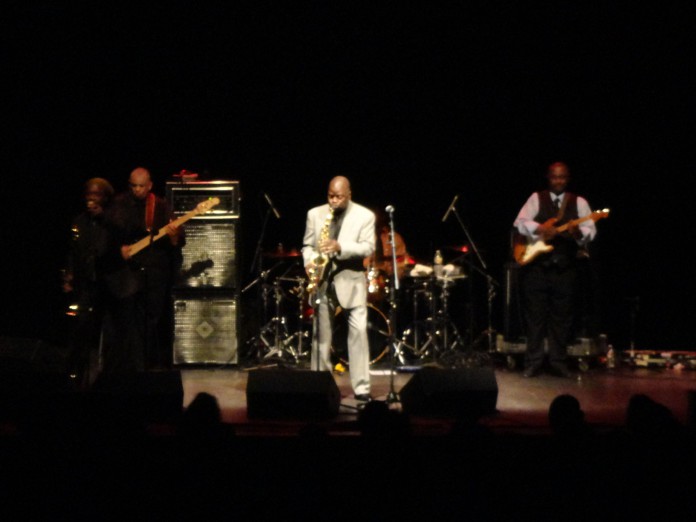 Maceo Parker is simultaneously performer, teacher and iconic funk saxophonist whose connection with funk’s heyday made him a living exhibition of American funk music at Campbell Hall last weekend. Parker has played with musicians such as George Clinton and Parliament Funkadelic, Prince and James Brown, with whom his saxophone solos made him “a household name among ’60s funk fans,” says music reviewer Bill Dahl.

With his nine-piece band, Parker taught and brought the funk to a standing, dancing Santa Barbara crowd. Among his band was Ron Tooley, a trumpet player with a funk history rivaling Parker’s and Rodney Skeet Curtis, who plucked his bass for a bangin’ funk vibe that made audience members comment: “Now that is funky”. Martha High sang vocals, leading two songs midway through the show to break up the instrumentals. Marcus Parker, Maceo’s nephew, kept the crowd going with his steady, satisfyingly snarky beats and Bruno Speight joined on guitar.

While each band member has his or her own independent history, the funk masters wove their talents together seamlessly. Jonathan Widran of All Music Guide reviewed: “Parker has a blast working with one of the hippest big bands in the world,”and it’s true that you’d be hard-pressed to find any of the performers having a bad night.

Funk, for those who haven’t heard it, is a blend of soul, jazz and blues. More than that, funk is an attitude; it is bending bass riffs and intuitive saxophone solos. It is upbeat, it is meant to make you dance. The audience is loud and opinionated, and whoever’s leading the show seems more like a kid trying to get away with something. In this case, Parker was a sly musician who snuck his band into UCSB’s largest lecture hall.

“I asked my manager before the show, ‘How long are they gonna give us?’ and you know what she told me? As long as we want,” said Parker.

Parker used his time wisely, alternating full-band numbers with solos. He showcased the talent of his band by having them leave, one by one, until only a drummer, a bassist or a trumpet player was left at the front carrying—and carrying well—the whole of the beat for the audience.

More and more audience members left their seats to dance in the aisles as the show progressed, and the show concluded with a huge number including the full band, and Maceo invited the crowd to swarm the stage. Students and Santa Barbara residents alike danced at the front of Campbell Hall as Maceo passed solos to his talented counterparts.

As far as funk music and its related genres go, Arts and Lectures has exhausted its performances for the year, but if you enjoyed Parker’s performance, check out the live performances at Cold Springs Tavern every weekend (see their website, http://www.coldspringtavern.com/entertainment for more information). Or, check out Soul City Survivors at Soho Music Club downtown May 6.