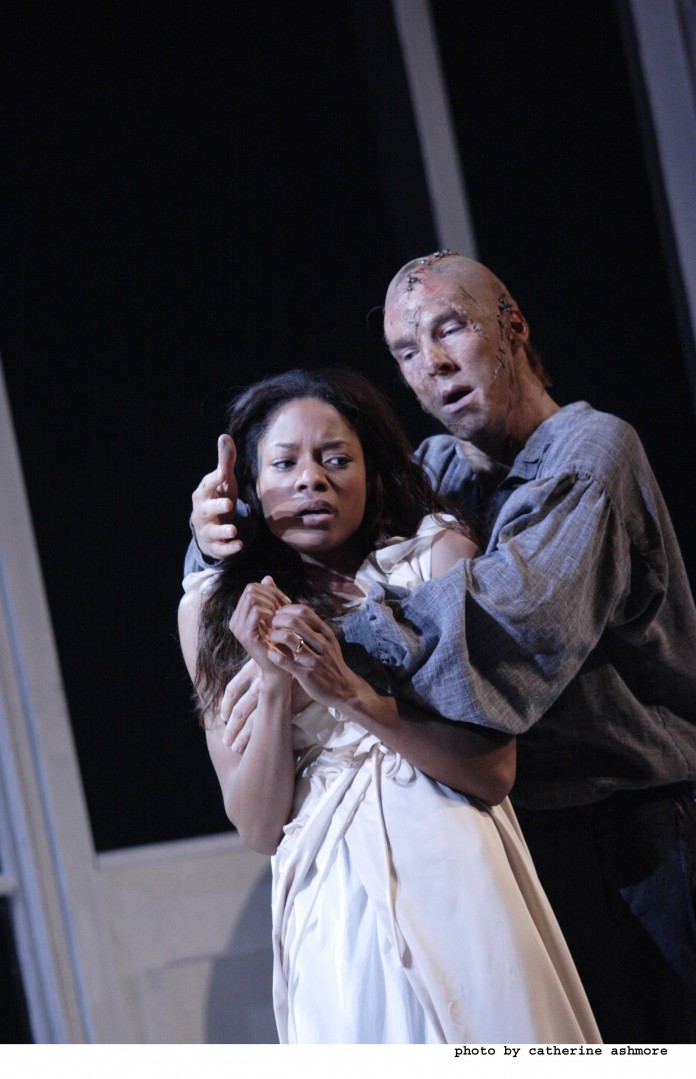 From the visually stunning sets to the brilliantly flickering lights and superb acting, Danny Boyle’s theatrical rendition of Frankenstein reminds the world that Mary Shelley’s 1818 novel will never die.

Danny Boyle, who directed Slumdog Millionaire and 127 Hours, makes Victor Frankenstein’s aCreature the star of the play. The audience becomes privy to the Creature’s birth and education, the building and destruction of his aspirations, and his tragic turn toward evil and revenge.

Boyle’s Frankenstein gives the Creature a voice—a voice that questions and criticizes humanity and society. Although the play takes place in the nineteenth century, playwright Nick Dear tackles modern issues about genetics, cloning, and the incalculable capabilities of humankind.

“We’re in the same dilemma today,” said Duffie Bart, a Santa Barbara local in attendance. “The whole creation debate that we’re going through is relevant, whether it’s science versus religion or evolutionary ideas versus the fundamentalist beliefs.”

The play begins slowly, illustrating the birth of the Creature and the overwhelming stimulation as he discovers his ability to walk. Above the stage, a myriad of lights sparkle like stars in the sky, while the realistic set immediately transports the audience to the scene of the action. Aided by these visuals, the pace quickens as both the audience and the Creature grow enthralled with the world Boyle has created.

The play was filmed with zooms and pans above the actors, but the style of filming did not distract from viewing Frankenstein as a play.

“Most plays that I have seen that been recorded aren’t well done,” said Aria Rowley, a first-year pre-Biology major at UCSB. “I feel like you have to be there live, but I think this was better because I could see close up to their faces and all the intricacies.”

The camera captures small moments between actors Jonny Lee Miller (the Creature) and Benedict Cumberbatch (Victor Frankenstein). What makes Boyle’s production of Frankenstein unique is that these two actors alternated roles every night when the play was performed live.

Miller’s Creature captured a man with a strong, inquisitive mind stuck inside a repulsive body. He grotesquely jerked and flapped across the stage while effusing profound questions. By delving into the Creature’s unfortunate history, the audience cannot help but sympathize with him and wonder if Victor Frankenstein is the real monster of the play.

Cumberbatch portrays Frankenstein as a brilliant, but socially inept and cold scientist with a burning pride to play God. In the end, the tables turn and Frankenstein is the one asking his Creature what it means to love.

Kaitlyn Fajilan, a UCSB third-year English and Theater Acting major, said that these poignant portrayals made it so the ending brought a tear to her eyes.

“It inspired me to try that much harder in my craft,” she said.

The chemistry between the two actors was palpable, completely eclipsing some of the lesser acting. Despite the truthful and touching renditions of Elizabeth (Frankenstein’s fiancée) and De Lacy (the blind old man who fosters and educates the Creature), the actors who played Frankenstein’s father and younger brother were distractingly mechanical.

Fajilan said that she didn’t quite agree with all the creative choices, which included some of the alterations between the novel and the play. Indeed, the play does not exactly follow Mary Shelley’s Frankenstein, but most of the alterations of the original text are believable, even if a bit surprising.

The Modern Prometheus is an alternate title for Mary Shelley’s Frankenstein, suggesting that Victor Frankenstein’s Creature stole the fire of life and received punishment for his transgression. Danny Boyle’s Frankenstein portrays a truly modern Prometheus, one who makes his audience question what it means to exist. In this way, the play leaves the audience stunned, just like the Creature opening his eyes for the first time and drinking in the awesome and horrifying bright lights.

Rusko Favored Over Headliner at Extravaganza 2011

Quentin Tarantino Gets Colloquial at SBIFF