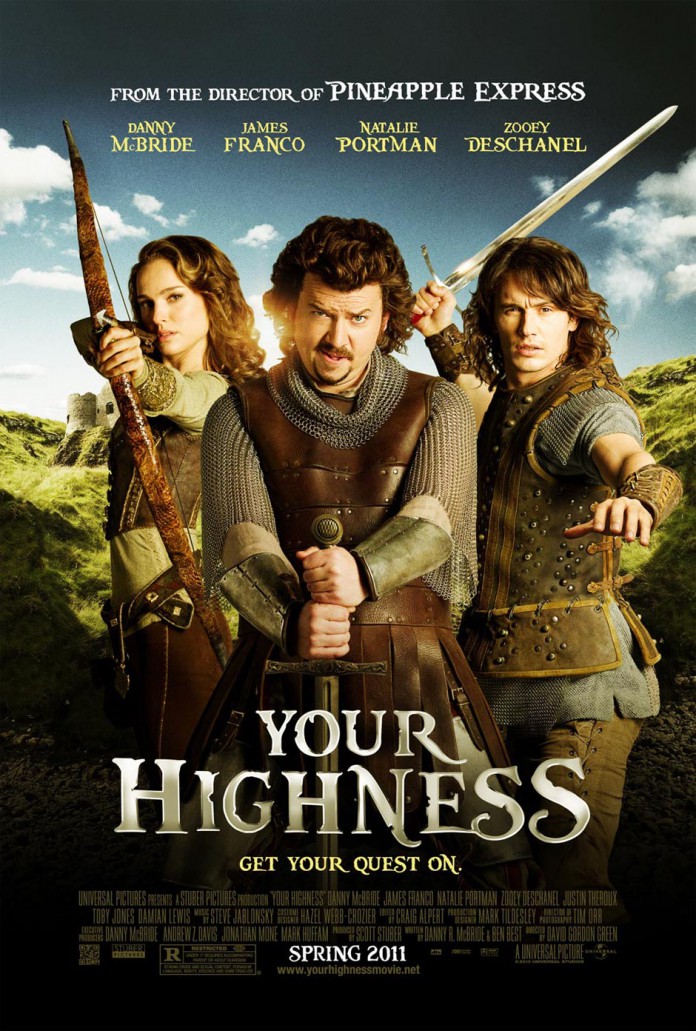 Considering that the film Your Highness has enough lewd jokes, topless women, blood and guts, and illegal substances to satisfy any young American guy’s testosterone-provoked cravings for all that is classified as manly, it would seem logical that the movie only appeals to that demographic. And normally, I would dismiss a movie like Your Highness as such, especially since the film’s preview came across to me as a brain-cell reducing flick filled with fairytale-quest movie clichés (James Franco was really its only saving grace).

But, lo and behold, I have to concede after viewing the film that my preconceived notions about Your Highness were not as accurate as I had originally predicted them to be. Granted, my projection about the film’s level of immaturity was spot-on. But the irony of what I predicted is that the obnoxiousness of the film, rather than turn me off to it and make me rant about how terrible it was, was what made it so enjoyable in the end.

Prior to viewing Your Highness, I had the opportunity to talk to the film’s stars and David Gordon Green, the film’s director, about how the movie came to be. Danny McBride told me that the idea for the movie came out of a joke between Green and himself, which seems only appropriate since the movie’s entire duration is filled with anachronistic elements inconsistent with the medieval period, lewd humor, slapstick comedy and scenes that are almost spoof-like of dramatic movies such as Lord of the Rings and classic period stories such as Camelot and Robin Hood.

“The whole movie contradicts the social etiquette of the era. I just feel like when I’m watching the beautiful dramas we admire, the prestige pictures that are kind of the same of a time period of elegance, I always think about, “What about that perfect prince’s rotten younger brother?” Green said. “And that’s where this story came about. It’s [about] someone who doesn’t know the etiquette, doesn’t know how to use a fork because they’ve been isolated from the world. So where we get a lot of comedy is sort of taking a piss at the fancy films.”

And smite fancy films, Your Highness does.  Scenes of Thadeous (played by McBride) getting stoned and chasing sheep through fields, Fabius (played by Franco) sexually stimulating the perverted ‘wise wizard’ who advises the brothers on their journey, and the attempted rape of Thadeous’ page Courtney (played by Rasmus Hardiker) by a mythical beast are only a few among a plethora of moments during the movie that would disgrace the Knights of the Round Table.

But despite its crude dynamic, the main idea of the movie as a stereotypical quest-to-rescue-the-damsel plot holds true. As Green said, “I’d say a really dirty Princess Bride would be a good analogy [for the film].”

The fact that the film is relatable to The Princess Bride, however, does bother me because in both films the female lead has a much more subversive role in the plot line. Although I can see how it worked in The Princess Bride, I thought that playing along with the film’s theme of contradicting norms, Isabel, (played by Natalie Portman) would have a more prominent role in the story. Her entrance during the gladiator dome fight scene was so intense that I thought she would only gain more momentum from there.  Instead, Portman was gypped of screen time and character development that an actor of her caliber deserves.

On that note, I did appreciate Thadeous’ development in Your Highness for a couple of reasons. While his growth as a character was predictable since he was the anti-hero of the movie, his progression from the ambivalent younger brother who lives in (and smokes in, and drinks in, and has sex with maidens in) his older brother’s shadow to the ultimate protagonist and hero of the film is what gives the movie its optimistic ending and sense of completion. It’s also refreshing to note that Thadeous does not omit his childish, dirty behavior completely at the end of the movie—after all, being a hero doesn’t make you a saint. I find that much more realistic and, therefore, a contribution to the movie’s legitimacy.

It’s this preservation of immaturity throughout the film that, from what I can conclude, makes it surprisingly appealing to audiences. By building off the timeless idea of a romantic, heroic quest in the name of love and giving it a vulgar and obscene spin, it’s enticing to more than just frat guys and ten-year-old boys who secretly watch porn past their 9 p.m. bedtime. Although it takes an appreciation of the offensive, I’d say that those willing to endure the tasteless humor will walk away from the film with a few things: an eradication of the archetypal medieval movie concept, a need to swing at things haphazardly with a sword, and an image of Natalie Portman’s bare ass ingrained in your memory.

Whether or not that’s a good thing is, in my opinion, a fair determinant of if someone will enjoy Your Highness or not.