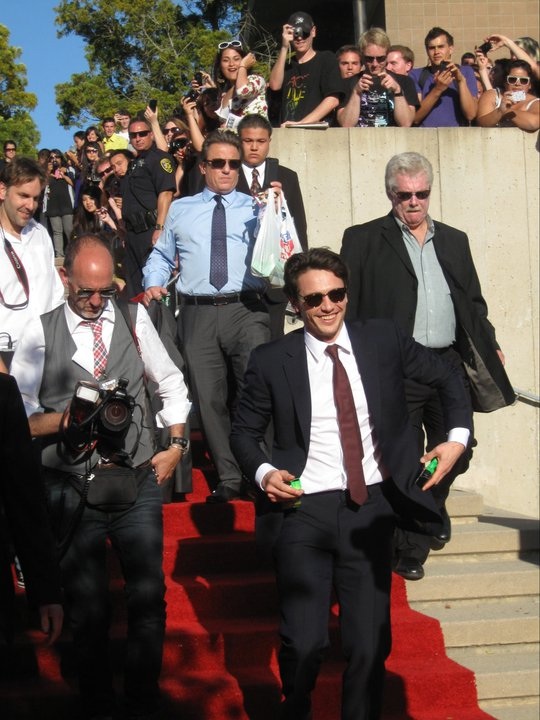 Cast and crew members from the action-adventure comedy Your Highness came to the UC Santa Barbara campus Friday April 1st, for the world premiere of the film.  The movie opens nationwide on April 8th, but an advanced screening was held for UCSB audiences

Thousands of students flocked into Storke Plaza well before the 4:30 starting time for an once-in-a-lifetime opportunity. The event was held at UCSB. As the grand prize for the school’s success in the viral campaign during the month of March that required college students to vote to bring the stars of Your Highness to their campus. The campaign was put on by Eventful, Inc a digital service that deals with social media marketing.

“Oh, absolutely,” Sarah Feldman, a second-year Computer Science and Economics double major, said when asked if she voted to have the event at UCSB. “I used all my parents’ computers when I went home!”

Everyone who demanded online to have the world premiere of Your Highness at UCSB received an email on March 26 form Eventful, Inc. saying they won and directed them to pick a show-time to attend on Friday, April 1. Whoever got a ticket was also allowed to bring one guest with them to the showing. However, many UCSB students found it difficult to get a ticket.

“By 11:45 a.m. the same day my friend texted me saying all the tickets were gone,” said Amanda Eng, a fourth-year music major at UCSB. “When I got the email I signed up for the 9:15 p.m. showing, but they didn’t email my ticket until the day before. It was very frustrating.”

Eng also commented on how the Eventful, Inc creators of the demand it campaign for Your Highness failed to promote the premiere primarily as a student event. Instead, whoever demanded the event to be held at UCSB were given a chance to obtain a ticket, whether they were a teacher, alum, or even a resident of Santa Barbara.

“They could’ve done a better job of keeping tickets for students who worked so hard to promote the event and get it to UCSB,” remarked Eng. “It was students who were constantly reminding people to sign up and asking family and friends to help support the cause.”

When asked about the event, Christopher Lehman, who handles Press and Media inquiries for Eventful, Inc said, “Eventful and Universal Pictures tapped into the true power of social media to introduce the college audience to a new movie by converting online Demand into a tangible offline event (UCSB movie premiere on campus). This provides a glimpse into a world where entertainment fans now have the ability to bring one-of-a-kind experiences to traditional social settings (college campus) based upon audience Demand.”

There was also a lot of mystery surrounding the use of Pollock Theater as a venue for showing the movie, which only holds 300 seats, as opposed to using Campbell Hall which holds 800, or IV Theater which holds 500. Joe Palladino, the Undergraduate Advisor for the Film and Media Studies Department, says that Pollock Theater was chosen because of its state-of-the-art surround sound and screen projection quality.

“It would’ve cost Campbell Hall $80,000 to upgrade its sound system,” Palladino said. “And IV Theater’s projection quality was not up to par.” However, with three screenings at Pollock Theater it was possible for 900 viewers to attend the world premiere throughout the night. And with the red carpet event at Storke Plaza, Palladino believed that many students and voters who demanded the world premiere would feel included in the Your Highness premiere, even if they couldn’t see the movie.

“There was free merchandise for over 2000 people available during the pre-party event, as well as free food through UCen catering services,” added Palladino. “However, with any event or contest like this there will always be people disappointed.”

Since this is the first time UCSB has handled this kind of event, and only had five days notice to prepare for it, Palladino thought the event went pretty well. “Universal Pictures paid for the whole event,” concluded Palladino. “UCSB was simply a venue, and a great one at that.”

All in all, attendees of the event were treated to complimentary catering, promotional merchandise, loud music, the chance to win free tickets to the movie and a meet-and-greet and autographing session with Danny McBride, James Franco, David Gordon Green and Justin Theroux. Storke Plaza was decorated with a red carpet and tapestries, posters, knight statues and other ornamentation that reflected the movie’s medieval theme.

“It’s just really cool meeting him [Franco]. I never thought that we would actually win, but we did and it’s really surreal being able to meet him and get his autograph,” Kelsey Gripenscraw, a first-year Psychology major, said. “And I got a picture with him, so it’s really awesome!”

Despite their fashionably late arrival, the stars were eager to talk about the film and interact with the event attendees.

“This feels so much better, this is so much more fun. It’s a party atmosphere; it looks like everyone’s having fun and they actually want to see it,” Theroux said. “Most of the time you’re shoved into a theater on Hollywood Boulevard and it’s all agents and press people.”

Although the appearances of the film’s stars sparked the most buzz and alone encouraged many students to attend the event, the film itself was also a main topic of discussion. Since the film doesn’t open nationwide until the 8th, UCSB students were among the first to watch the film and learn more about it beyond the synopses available online.

McBride, who was one of the primary screenwriters for the film as well as the main character, said that the title and story for Your Highness came about from a joke.

“David [Gordon Green] and I went to film school together, and we’re big film nerds and we’d play this stupid game all the time where we would come up with a title for a movie and try to figure out what the movie was about,” he said. But on the the set of Gordon’s movie All the Real Girls in 2001, “He [Green] just turned to me one night and said, ‘Alright, the name of the movie is ‘Your Highness. What is the movie about?’ And I said, ‘It’s about a prince who gets stoned and fights dragons.’ And what started as a joke has now turned into a reality this many years later.”

When asked how Oscar-winner and co-star Natalie Portman handled the raunchy humor and storyline of Your Highness, James Franco said she was all for it.

“She loved the dirty humor, I think she loved it more than anybody actually,” replied Franco. “And she told me the reason she wanted to do a comedy was because of Pineapple Express.”

Franco also discussed how acting in Your Highness prepared him for his oscar-nominated performance and working with Danny Boyle in 127 Hours. He also compared his experience working in a big Hollywood production like Your Highness to working with many independent films he’s done in the past.

“You usually have the essentials like a camera and other actors for both,” said Franco. “When you need certain things like a fantastical world you know, you need a lot more money and a big studio, so it’s kinda different kinda the same. I don’t necessarily prefer one over the other it just depends on what type of story I’m interested to tell.”

Immediately following the pre-party event, those lucky enough to score free tickets to one of three showings of the movie at Pollock Theatre headed over and enjoyed a free showing, along with popcorn and drinks. Green, McBride, Franco, and Theroux also made an appearance at the 7 p.m. showing and talked to the audience before sitting down and watching it along with the other attendees.

“This is kind of like a dirty kid’s movie in a way,” Green said to the audience. McBride followed Green’s comment by saying, “We were hoping you guys would win, because we wanted to show the movie here!”

Based off of how quickly and effectively UCSB students rallied together in a matter of days to make McBride’s statement possible, it’s obvious that they wanted UCSB to win, too.