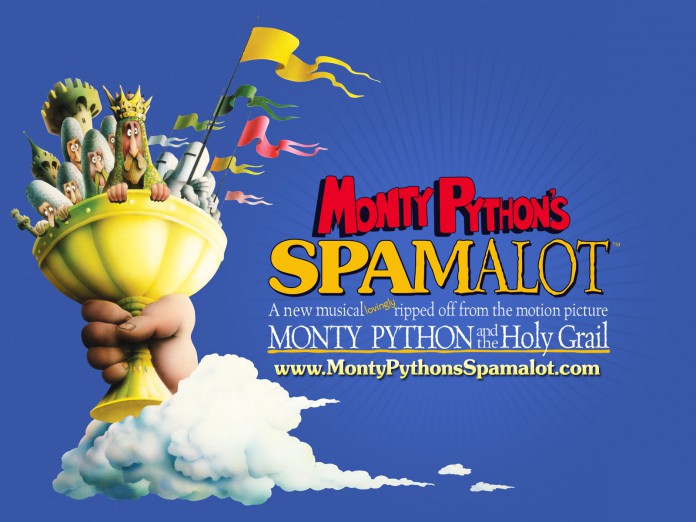 Broadway’s National Touring Company stopped by the Granada Theatre to perform the musical Spamalot on March 8-9. Self-described on their website as “a new musical lovingly ripped off from the motion picture Monty Python and the Holy Grail,”  this 2005 Tony Award Winner  mixes Arthurian Legend with British humor and show biz. The production was directed by Mike Nichols, with music and lyrics by Eric Idle and John Du Prez. Only six musicians comprised the orchestra, including two pianos, two trumpets, a trombone, and a French horn.

The Granada was packed with a very distinguished crowd for such a bawdy show. At first, I was confused by the age of the patrons before realizing they’d probably witnessed the rise of Monty Python’s infamy, from the original British TV show Flying Circus to the subsequent movies.

Hilarious references to the Python films, including the appearance of Tim the Enchanter, the killer rabbit, the French taunters and the coconut sketch were incorporated.

A highlight of the show was the inclusion of Monty Python’s signifying song “Always Look On the Bright Side of Life,” from 1979 Life of Brian, which wrapped up the irony, wit and depth of the comedy group in a morbidly funny way.

Monty Python premiered in a British sketch comedy show called Monty Python’s Flying Circus in 1969. Eventually, the group produced the feature-film Monty Python and the Holy Grail, a cult classic that retains its snick and wit even today. The group disbanded after several more features. Eventually, Eric Idle, one of the founding members, decided to move the show onstage. Despite a mixed reception from the rest of the Python cast, Spamalot premiered on Broadway at the Shubert Theatre on February 14, 2005.

“Definitely go see the show! The show was just as good as the Broadway production,” said Mendy Ling, a second-year Music major at UCSB. “Even though I’d seen the movie, I got a kick out of the glitz and glamour.”

Granada will be hosting a series of musicals for the next half a year. Upcoming attractions include The Blue Man Group, Young Frankenstein, My Fair Lady and Grease. Check out the Granada Box Office on State St. or call 805-899-2222 to purchase tickets.