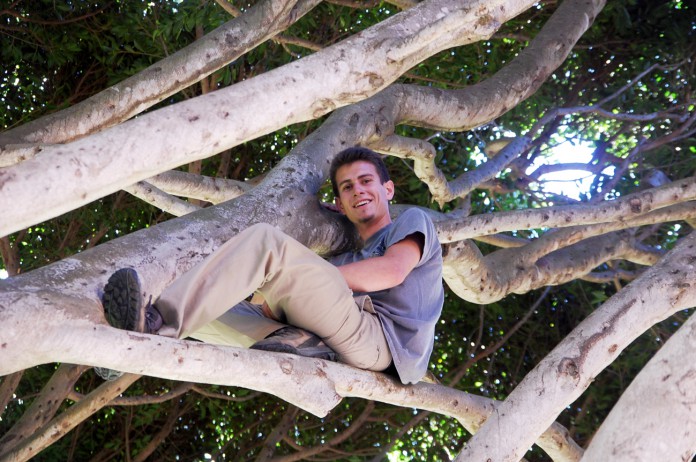 Look up to the trees the next time you bike past Storke Tower—there may be someone waving back at you. Recently, students have been spotted climbing the trees along Pardall corridor and near Buchanan; this has become a frequent hobby for some.

Climbing trees can be a fun means of exercise and with the huge number of trees on campus, it’s more accessible than the rock wall at the Rec Cen. Though it may be more of an obscure hobby, tree climbing does exist on campus.
Konopelski often sees other climbers, and climbs with friends.

UCSB has some concern for climbers, and discourages climbing, both because of the danger of injury to the climber and to the trees on campus.

“The UCSB Police Department is structured around people’s safety,” says Sergeant Matt Bowman of UCPD. “Regardless of skill level, the potential exists that [a climber] may fall out of the tree. The UC Regents carry liability if we don’t actively attend to people’s wellbeing.”

The trees, Bowman points out, are UCSB property and damage to trees caused by climbing is technically damaging university property.

According to the California Legal Code, “A public entity…is not liable to any person who participates in a hazardous recreational activity…and voluntarily in the place of risk.”

Regardless of any possible legal repercussions from the sport, Konopelski is confident and passionate about his climbing, and says he wouldn’t blame the university for an accidental fall.

“I think it is really dangerous but overall, for me, the benefits outweigh the dangers,” Russo continued.

Some students haven’t seemed to notice many of the tree climbers; maybe they just blend in.

“I’ve never seen people in the trees at UCSB, either on campus or in the parks in Isla Vista, but it sounds like a good workout and a lot of fun,” said UCSB third-year Psychology major Amy Maggard. “I enjoy rock climbing and I have a lot of friends who are professional at it. Maybe if I tell them about this, they could practice by climbing trees between class periods.”

Despite the risks, Konopelski’s message for other athletes in extreme sports is, “Do what you want, no matter what others think. I live by that general statement.”