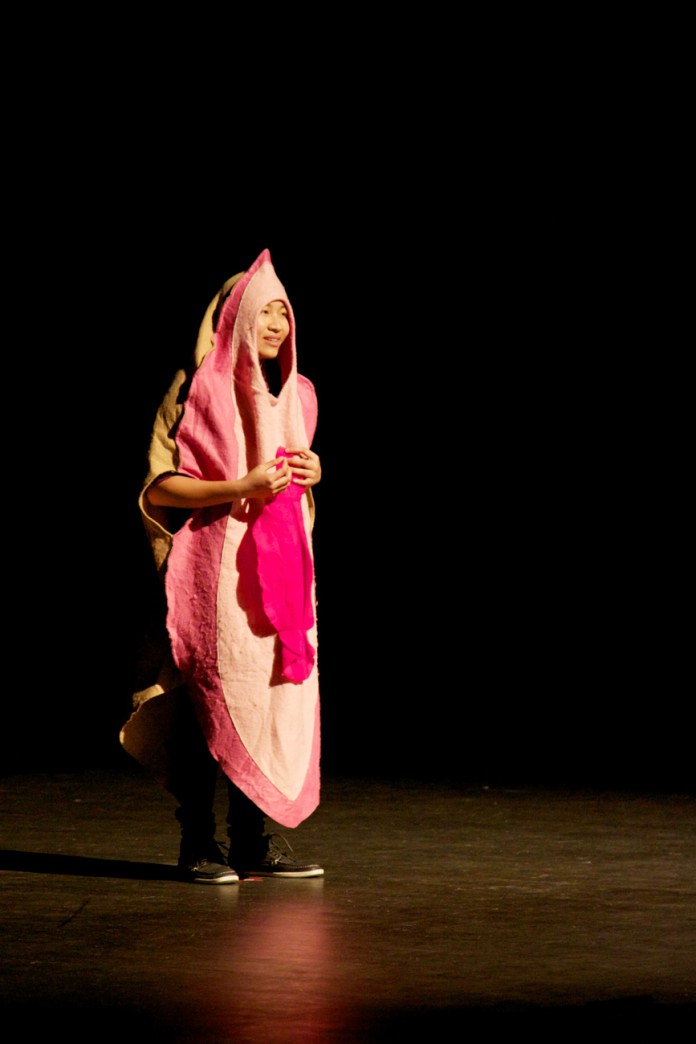 When I first saw the girl dressed in a vagina costume dancing around campus, riding her bike and playing twister in front of Storke Tower, I thought she was a walking hot dog just being random for fun. But when she yelled “Come watch the Vagina Monologues” I knew I had to see what it was about.

On February 18 and 19, UC Santa Barbara’s Women’s Ensemble Theater Troupe (WETT) presented their thirteenth annual production of The Vagina Monologues in Campbell Hall. This year, the proceeds of the show will benefit the Women and Girls of Haiti and the local Santa Barbara organizations Domestic Violence Solutions and Rape, Abuse & Incest National Network.

“The show is a corner stone for the international movement V-Day to end violence towards women and girls. A lot of universities worldwide do this to raise awareness, educate people, entertain people, and empower people,” said Chandra.

The show proved to do all of these things, especially entertain. The cast, unified by their purple and black clothing, engaged the audience with their superb acting. The 21 monologues covered many different subjects, ranging from comedic skits such as rants about tampons, examples of moans and experiences of sex to serious pieces about women being raped in Yugoslavia, boys being harassed for being feminine and transgender and the living conditions for women and children in Haiti.

The actresses spoke directly to the audience, making the performances more relatable as well as making the audience laugh and be emotionally moved more easily. The lack of props or costumes (except one or two) did not take away from the production, but rather it allowed the audience to focus more on the words being said and the actions being performed. Because of the simplicity of the empty stage and the people presenting the piece, the audience was more attentive and thus more affected by it. Every one of the 21 pieces put together formed the effective and entertaining feminist movement.

But UCSB first-year Film and Media Studies major William Wong did not think that the production was as effective as it could have been.

“I didn’t feel like it was that effective because it was more comedic than serious. The way in which the serious issues were quickly followed by funny monologues didn’t allow the gravity of the problems to sink in enough,” said Wong.

But this opinion wasn’t felt by everyone. An actress in the piece “Smell,” Sneha Tatapudy said that being in the WETT changed her views and that she plans on auditioning for the Vagina Monologues again next year because she had an amazing experience and learned so much from the performances.

“Before being a part of Vagina Monologues, I was oblivious to a lot of these things happening in the world and I didn’t realize the importance of informing people of the issues faced by many women. Even though the show was mostly funny, it talks about the brutal circumstances so simply and clearly that it touched my heart and desensitized me,” said Tatapudy.

Most of the audience members, including myself, gave the cast members a standing ovation during their final bows. Even though the Vagina Monologues may be remembered for their more humorous monologues, it showed that women are free to speak about sex and are free to be comfortable with themselves while still entertaining hundreds of people. By addressing the critical concerns of women in an interesting way that attracted numerous audience members, the WETT fulfilled its purpose to raise awareness and money for the victimized women who need it most.