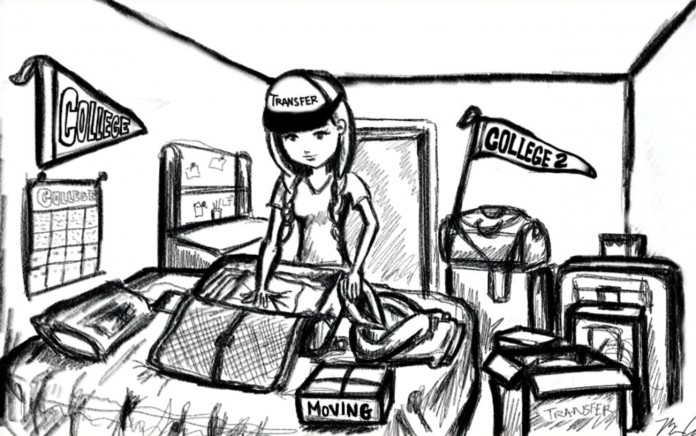 Is your wallet feeling empty as four years of college come to a close? Are you barely finishing
all the classes for your major before graduation? Has the realization set in that you’re going to be
returning home after four years of being “independent?” Although you might have been laughing
at those who were junior college-bound while you signed your letter of intent to start at a big
university, we’re the ones laughing now.

I remember graduating from high school, seething with jealously as my friends were shopping
for their dorm rooms. Like many, I had fed into the false notion that attending a four-year
university after high school was the only way to go. I had graduated with an above average GPA,
been involved in extra-curricular activities, and had even taken Advanced Placement classes and
the SATs in preparation for a four-year school. So what was I doing at a junior college where
supposedly the rejected, lazy, and burn-outs attend?

It was the best decision I made.

The most obvious advantage of attending a junior college is that you save money. One year
at UCSB is estimated to cost around $25,000. Multiply this by four and it’s possible a college
education could cost $100,000 for one student. And imagine parents who have more than one
child to put through college! With the state of the economy and rising tuition, a J.C. is the
financially prudent choice. By staying at home an extra two years, I was able to work and save
up money for when I transferred.

In addition to saving money, I saved time. A freshman at a four-year college and a freshman at
a junior college take basically the same classes since that first year is about getting your general
education out of the way, and J.C. students aren’t just one of in a class of six hundred students.
Since I knew what I wanted to major in when I transferred, I didn’t waste time experimenting
with different majors before deciding. I was also able to attend the school I wanted because I had
more time to research, as opposed to some of my friends who didn’t get into their first choice
and therefore ended up going to whatever school they got into.

I was also able to take part in activities that contributed to learning about myself and what I was
interested in pursuing as a major and as a career.

At 18, I had no idea what to do because I had very little real world experience. But while
attending a J.C., I worked on my college newspaper staff and quickly discovered that I have a
knack and love for writing. The two years I spent working for the paper were some of the best
of my life; I made unforgettable friendships, challenged myself, strengthened my writing and
communication skills, and matured as a person. This experience led me to ultimately select

Communication as my major and pursue an editorship with The Bottom Line.

Maybe most importantly, I was not mature enough to leave home at 18. Most think they are, but
at 18, we usually haven’t had to deal with any life-altering experiences and are used to having
our parents around. Many freshmen go crazy with their newfound independence and make
unwise decisions, fall behind in classes, or drop out of school altogether. The two extra years I
spent at home enabled me to bond with my family and mature without dealing with a bad acid
trip or blacking out before learning my lesson.

Freshman year for many is the most fun. I am often asked if I felt like I missed out because I
didn’t get the “college experience.” But I don’t have any regrets. I was able to transfer and still
meet new people, party it up, and take advantage of being on my own.

Needless to say, junior college is starting to become the smarter option because of how
competitive colleges are becoming and the rising tuition. Hopefully, soon the negative stigma of
community colleges will be long forgotten and my kids will be excited for their first day of at a
J.C.