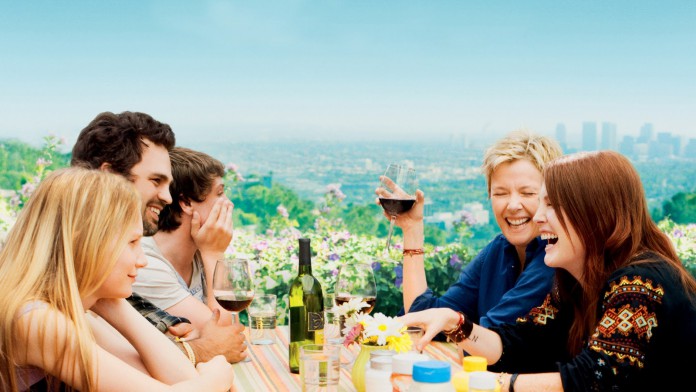 The Kids Are All Right
Elysia Cook

Amidst all the hype in the media lately about same-sex couples, some may argue that Lisa Cholodenko’s 2010 comedy drama The Kids Are All Right premiered at a bad time. But really, it could not have come out at a better time.

The film, which stars Annette Bening, Julianne Moore, Mark Ruffalo, Mia Wasikowska and Josh Hutcherson revolves around what occurs when Nic (Bening) and Jules (Moore) have to deal with their sperm donor named Paul (Ruffalo) after their children Joni and Laser (Wasikowska and Hutcherson) contact him during one long summer.

The beauty of the film lies in how it portrays an unconventional twenty-first century family in a way that is still relatable to the audience.

Despite the obvious fact that the story’s leading couple is comprised of two lesbians rather than a heterosexual male-female couple, Choldenko shows how substituting “Adam” with another “Eve” doesn’t deprive the plot of any substance or entertainment.

There are still plenty of scenes and instances that correspond with typical family dynamics and milestones—the family shares dinners and many awkward moments, they all drop off Joni at college, and Nic and Jules struggle to maintain the spark in their relationship.

“Really, it [the plot] is a classic structure—trying to keep a family together; a couple who runs into problems,” said Bening before she accepted the American Riviera Award at the Santa Barbara Film Festival on Monday, January 28.

When Paul—played understatedly well by Mark Ruffalo—enters, the biological sperm donor of Joni and Laser adds a spin to the plot when the kids contact him to learn more about the man who gave them half of their chromosomes. This is where the film’s direction sharply turns and gives the movie its distinguishing angle. Although Paul’s laidback demeanor and fun-loving attitude make him seem like a cool uncle or a chill older brother, the fact remains that he is the father of Joni and Laser—and to Nic, an imposing presence on her family.

The sequence of events that follows is a roller coaster of interactions between the characters, which culminates to create a jeopardizing disarray of emotions.

What makes The Kids Are All Right work is how Cholodenko balances the humorous, lighthearted elements of a stereotypical American family with the deeper, more serious underlying relationships of the characters that give the story its breadth and depth.

Despite the fact that there is no fairytale ending to look forward to (the ending itself is actually somewhat ambiguous), the film is a cleverly crafted family-dynamic story that speaks out not only to the same-sex couple community, but to everyone else as well. Its ability to blur the lines of what is considered a ‘normal’ relationship and convey that message in a comical, yet heartwarming way is what makes The Kids Are All Right more than just an “alright” movie—it makes it an extraordinary one.