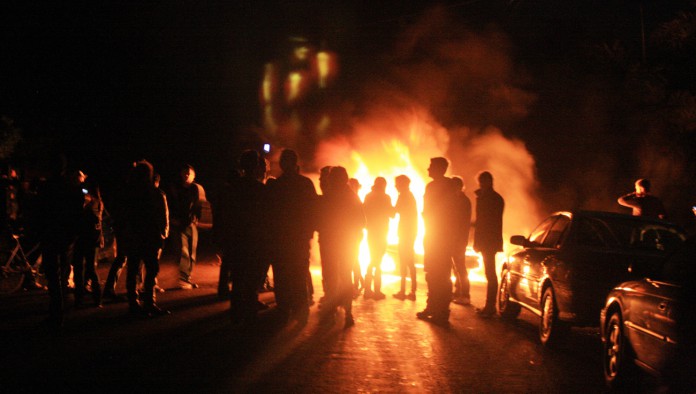 “Witness a Couch Burning”: item number 73 on the “IV Bucket List.” For those students on Del Playa and Sabado Tarde roads on Friday, February 18, this could be triumphantly crossed off of the list. Many of the brave souls who battled the treacherous winds, heavy rain, and overall unfavorable weather conditions ended up at parties with power outages and couches on fire in the streets.

Lieutenant Ray Vuillemainroy from the Santa Barbara Sheriff’s Department stresses a “zero tolerance” policy for this kind of behavior.

“It is illegal, and we will not condone it,” he said. “Nothing positive comes out of burning couches.”

Couch-burning ceremonies tend to begin toward the end of the year when graduating students need to get rid of their furniture. While this happened earlier than expected, Vuillemainroy suggests that the power outage may have provoked the thought.

But the act of burning couches endangers both students and the community.

Residents complain about the fumes, which are also harmful to the environment and the safety of the street. The fire department had to send in heavy reinforcements and the fires have the capacity to spread and potentially hurt people, vehicles or homes.

Dave Pascoe, a UCSB second-year, said that the experience was like a firework show.

“People went and jumped over the couch while it was on fire. There were about 30 people on my balcony watching it happen,” he said about the couch fire on Del Playa. “It was unfortunately a very comfortable couch.”

Third-year student Oisin Lewis, who witnessed the event on Sabado Tarde, said, “It was funny how when the lights went out, it was like madness in IV.”

The streets crowded with an overflow of students watching in awe of the intense street light, as endless chatter and screams came from every angle.

“The couch was immediately on fire; it had to just be doused with gasoline,” UCSB second-year Ian Connell said. “The street flooded with a hundred people, but the cops attacked it from five different angles. It had to be pretty strategically planned out.”

Luckily the fire department was able to put out these past fires in a timely fashion.
But the shenanigans didn’t end there.

“On Sabado, we cited two males urinating on the couch itself,” Vuillemainroy said, shaking his head disapprovingly.

“My friend and I each picked a corner, peed on the couch, and then I felt the officer grab my shoulder,” said one of the offenders, who wished to remain anonymous.

The couch was right outside of the perpetrators house, which was hosting a twenty-first birthday party. The perpetrators claimed they were “trying to put out the fire,” but they regret not apologizing to the officer for the act.

The two were ticketed for the offense and given a March court date.

But there was some optimism that came out of the night.

“At least I didn’t have to go to the bathroom anymore,” the offender reflected. “I had a lot of liquid that night.”