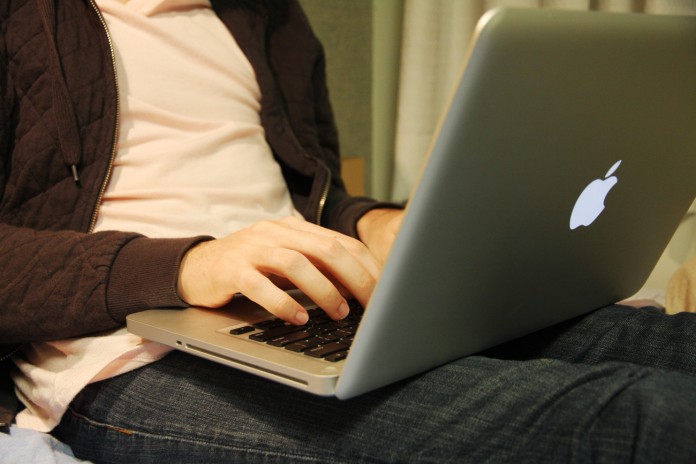 In college, convenience is everything. At the end of the day, instead of sitting on an uncomfortable chair at a desk, a student can combine two great things—a comfortable bed and a laptop computer—as he or she lounges in bed doing work. But what are the risks to the body from constantly resting a computer on one’s lap?

There have been several rumors about the new “laptop thigh” condition generated amongst college students.

The condition, referred to as “laptop thigh,” is clinically known as erythema ab igne. According to a case report issued by researchers at the Department of Dermatology at Eastern Virgina Medical School, erythema ab igne occurs due to “repeated long-term exposure to infrared radiation insufficient to produce a burn.”

In the past, erythema ab igne was a condition that typically developed in people who worked around a great amount of heat.

Don’t worry—resting a computer on thighs for too long will not cause walking disabilities. As mentioned on Healthline, walking disabilities are often caused by injury or compression of the sciatic nerve, none of which occur when a laptop is simply placed on one’s lap.

But it was recently reported on CNN Health that a young boy from Switzerland, who was playing computer games for several hours straight, developed a rash on his thighs. After visiting the Dermatology Department at the University Hospital Basel in Basel, Switzerland, doctors confirmed that the source of the young patient’s rash was due to heat from his computer.

Fortunately, the treatment was to simply remove the source of heat, which, more specifically, meant taking the laptop off of the boy’s lap. The boy’s dermatologist, Doctor Bav Shergill, stated that the skin rash would clear up quickly without any long-term effects.

While a case study by researchers from the State University of New York has found that laptop heat can significantly reduce sperm count in men, it was also found that any unnatural warming of the scrotum tends to have the same effect on sperm count.

Spermatogenesis, or the production and development of sperm cells, is dependent on temperature. The case study found that keeping a computer on one’s lap can raise the temperature of the testicles by up to about three degrees Celcius, which is equal to about 37 degrees Fahrenheit. A rise in temperature can reduce sperm count by up to 40 percent. After a break in the exposure to the heat source, sperm count began to increase, suggesting that the heat produced by the laptop is merely a short-term effect.
It may be convenient, but placing a laptop directly on the lap still has minimal health risks and is not good for the computer. Laptops need a hard surface for their air vents to release heat for a long lifespan. An overheated computer runs slower, and has a shorter computer life.

Although the name may be misleading, laptops were made to be computers that could be easily moved to different locations, not necessarily to be placed on the lap for long periods of time. One can avoid possible rashes and computer damage by simply placing a textbook or other hard surface underneath the laptop to avoid direct heat contact with your thighs.

“I recently noticed my computer getting hotter faster, so I bought a lap desk from a bookstore,” said Mia Giovanetti, a fourth-year UCSB Business Economics major .“My computer doesn’t overheat when I use it, and it is more comfortable on my legs. Not to mention I can eat Ramen, do schoolwork, and be in bed all at the same time.
But not all UCSB students are planning on changing their habits.

“Seeing as [laptop thigh] has never happened to me or anyone I know, I’m not too worried about it,” said Kelly Jaeger, a UCSB fourth-year Communication major.

Some students choose to use a table when having to use a laptop for extended periods of time.

“When I write a paper, I go to the library and use tables there,” said Caroline Rowland, a UCSB fourth-year Global Studies major.

“I only put the laptop on my lap when I’m at home using my computer for leisure, which is usually [for] short periods [of] time.”

Although using laptops on one’s lap may lead to short-term health problems, like rashes and a lower sperm count, it is not overly dangerous in terms of long-term health and well-being.