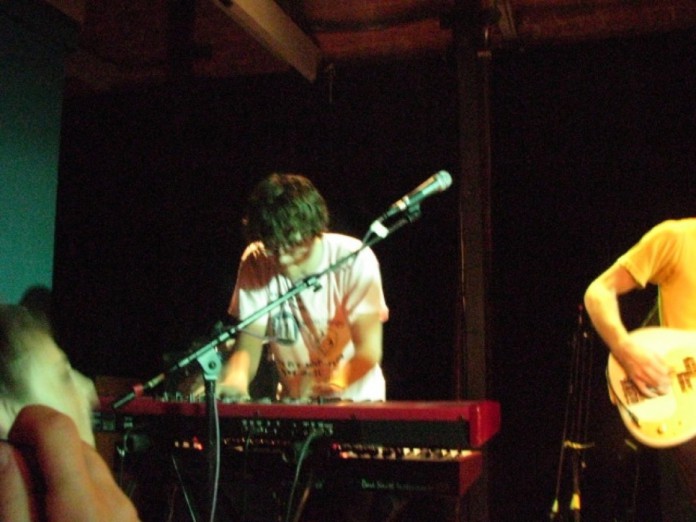 Indie newcomers Ra Ra Riot got the party going at Soho Restaurant and Music Club in downtown Santa Barbara on Wednesday, January 19. Red, green, yellow, and blue stage lights set the mood for what proved to be a night full of riveting tunes, shaking floors, and hyped students.

The festivities kicked off with a lively performance by The Givers, an Indie-pop group from Lafayette, Louisiana, who set the stage for Ra Ra Riot.
Since the release of their first album The Rhumb Line in 2008, Ra Ra Riot has been steadily rising in popularity. Their smooth melodies and upbeat tempos seem to seduce their listeners into submission.

“I like their lyrics, they make my heart melt and so does the singer,” said Jenny Jensen, a UCSB first-year Global Studies major.
UCSB third-year Sociology major Celeste Martinez is also a fan of the indie band.

“I really like Ra Ra Riot,” Martinez said. “I saw them on campus a couple of years ago when they opened for Death Cab for Cutie.”

It’s no surprise that this American Indie rock band from Syracuse, New York has been reaching such a large fan base in the last couple of years. Ra Ra Riot recently performed on Jimmy Kimmel Live, where they sang “Too Dramatic,” a song from their newest album The Orchard.

Part of the allure of Ra Ra Riot’s music is the emotional sincerity that each song evokes, striking a chord with listeners.

“My favorite song is ‘Can You Tell’ because on more than one occasion I’ve played that song and realized it’s my life,” said Milja Miric, a UCSB first-year Political Science major. “I think that’s really cliché to say, but it’s such a relatable song.”

Ra Ra Riot’s distinct sound is created mostly using unconventional instruments. Along with the usual guitar and bass, Ra Ra Riot also features a cello and violin player. The softer melodies of the violin and cello complement the low-pitched rougher sounds of the guitar and bass. The violin and cello also add excitement and energy to the performance, defining the music as a unique blend of pop and rock.

This sudden wave of prominence seems to be much more then Ra Ra Riot members had ever anticipated.

“We started playing in college together at Syracuse University,” Ra Ra Riot guitarist Milo Bonacci said. “It started as a project and now here we are five years later; it’s totally unexpected.”
It seems to be just the beginning for the Ra Ra Riot, so be on the lookout for this rising indie sensation and check out their newest album The Orchard.

“I loved it. Third time’s the best time,” Miric said after the show. “Every time I see them I get goose bumps because they have such a great stage presence.”