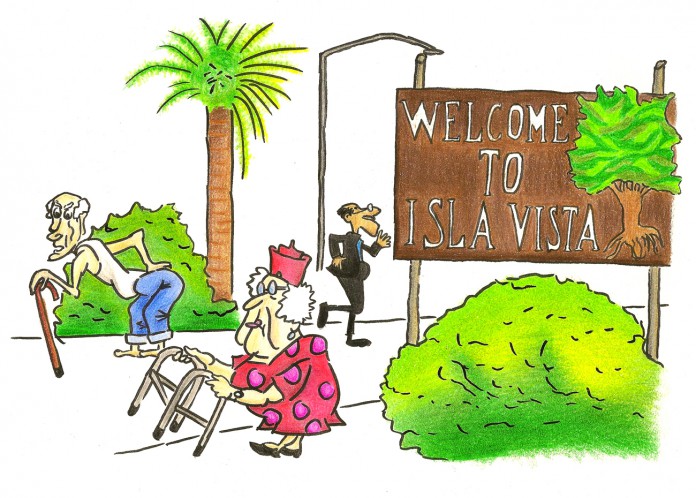 Ambling through Isla Vista on a mission to find Steve’s apartment for more tequila-salt-and-lime shots, my friends and I observed how much the scene had changed since our freshman debut. On that night we were disappointed by closed doors and quiet streets. Isla Vista seemed a fallen empire, a ghost town, a sham.

In regards to trends, this one is the lamest.

IV, known as California’s “party central,” is on the dip. Now when people call UCSB a party school, I chuckle nervously and change the subject. With police crackdowns and debilitating ordinances, our IV party life is either dying, maturing, or transforming into furtive living room parties and massive “freshmen traps” whose purpose is to attract inexperienced freshmen to Del Playa Drive.

Since IV hits the refresh button every four years, most don’t remember the glorious decades that established IV’s status quo. Few commemorate our collegian ancestors, like the angry mob that burned down a Bank of America in 1970, or the brave souls who erected the infamous IV Halloween. Now with all of the curfews, beach-drinking prohibitions, “no tolerance” policies, noise and host ordinances, and IV Foot Patrol cyclists, we party with our heads low and our cups down.

“Isla Vista as a lame party location is drastic falsity. IV still parties and parties hard,” said Summer Galante, UCSB fourth-year Comparative Literature major. “The difference is now we have to find a legitimate reason for such belligerence.”

With the dismal economy and higher tuition and rent fees, our tighter budgets have halted frivolous spending habits. Gone are the days when you could get free alcohol from complete strangers.

“Long story short, I don’t think IV is having a ‘losing streak.’ I just think everyone around us is having a ‘growing-up streak,” said UCSB fourth-year Geography major Maddie Brown.

Perhaps Isla Vista isn’t suffering an alcoholic drought as much as a binge-tinted evolution. IV’s party scene still keeps its game face on, even if most of the doors on Del Playa have closed themselves to the public.

“I personally don’t think Isla Vista is losing it, but it’s definitely changing,” said Eric Gungon, Manager of Santa Barbara Party Scene. “There’re less house parties with alcohol for everyone. Now there are more super huge parties and smaller private parties. The Greek system has also grown to be a bigger part of IV.”

Isla Vista is no longer one communal party where you could go to many houses and rage with anybody. Now we’re seeing a feudal Isla Vista party scene develop, with a few ceremonial gatherings on Del Playa, aristocratic parties in the Greek system, and living room parties among friends. There’s no longer a middle class of mass party.

Whether this means you’ll have to search harder for parties to crash on a Friday night—or just get used to the smaller, more personal gatherings—the decision is up to the partier.