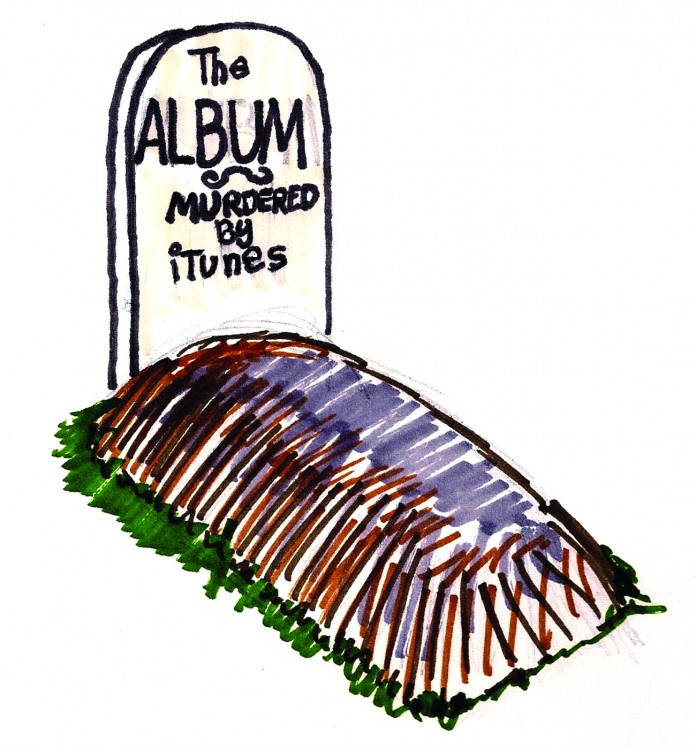 Don’t get me wrong, iTunes is probably one of the greatest inventions in the history of mankind right up there with the light bulb. I have nothing against iTunes. In fact, I use it every day. That being said, with every great invention comes a price, and there has been a major drop-off in the artistic sense of albums that have been released in recent years with the advent of iTunes.

Even excluding the greats, one thing is for sure; albums have always been great when artists put the time in. But because of iTunes, production companies have recently taken the easy way out, making albums only for hit singles rather than thinking of albums as a whole.

No longer will the world ever have a truly great album like The Beatles’ Sgt. Pepper’s Lonely Hearts Club Band or Pink Floyd’s The Wall.

The days when every song on a particular album revolved around a central theme have disappeared. Once upon a time, Pink Floyd produced songs strictly for acid trips, Bob Dylan sang of activism, and jazz and soul were meant for seduction and love. But those days are over. No longer will there be albums made solely to provide background music for a drug trip or to set the mood for romancing a girl.

Before iTunes, albums defined generations. From the Beatles’ White Album in the 1960s during the British Invasion to the Pixies’ Surfer Rosa, an album fully dedicated to the surrealism of the world, albums had a deeper meaning beyond a hit single.

Due to the success of iTunes, now listeners only care about adding singles to their playlists. The best a record company can do is produce a crap album by Kings of Leon or Linkin Park, which in retrospect may produce many singles, but lack any underlying depth.

My rant isn’t only directed at rock music.  The same argument can be applied to the hip-hop industry, which at one time produced albums by Public Enemy, Dr. Dre and Eminem.

Now anyone can come out with a single, especially with the newly popularized auto tune and some catchy lyrics about sex.

Since the addition of iTunes, people like T-Pain, Flo-Rida and Kesha have become famous by creating music that would’ve easily been thrown away a decade earlier.

It seems that the only style of music that has stayed traditional to album quality is that of indie bands. Without high-end production companies having a say in the independent industry, bands can still write good music without focusing all their attention on one or two songs within an album. They’ve stayed true to what all bands used to do, and that is the concept of actually thinking each song out one by one.

It just seems like more and more bands have sold out because the majority of people in today’s society only care about catchy singles. There’s a reason why Weezer and The Offspring haven’t had a truly good album since the beginning of the 2000s. Two of the bands that defined 1990s high school kids throughout the world can’t even make good albums anymore.

Just because record companies have sold out doesn’t mean we have to sell out on how we listen to our music. Listen to the true art of the albums in the way they were meant to be heard.