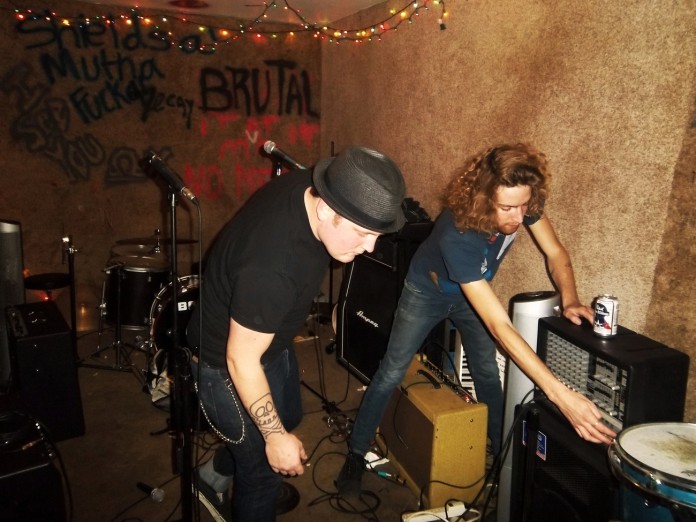 On any weeknight, take a short walk in Isla Vista down Embarcadero Del Norte to a small, hardly noticeable street called Seville Road that wraps to the left just before Korean BBQ. Once there, listen for the distinct jolts of clamoring percussion, the faint crunching riffs of an electric guitar, and the smooth yet powerful undercurrent of an amplified bass emanate from a seemingly unremarkable pair of public storage buildings. Unofficially dubbed “The Space” by the people who use it, these twin storage facilities provide an ideal haven for local IV bands that come together to play their music.

Andrew Piepenbrink is one of the many musicians who frequent this lesser-known island of Isla Visa subculture.

“This is a place for music. Most of the people who use this place aren’t even students and not many people know about it, but there are a lot of bands with great work ethic,” said Piepenbrink. “It’s almost religious for them. They come and you can hear at least someone practicing really hard every night of the week.”

Around 60 bands have sojourn to The Space as a kind of musical Mecca. Most of them are forced share the available rooms because of high rent and limited space.

“It’s about $400-600 total for these rooms, and most bands share to divide the costs,” said Cody Franklin, a third-year Sociology major who rents out Room 6 with his band The Erectors. “I pay about $160 a month on my own, but I don’t mind because I freaking love playing music. I’ve been coming here since I was a freshman.”

The resourcefulness it took to transform this run-of-the-mill storage facility into the gem of a jam-shack it is and the sacrifices these guys make to be able to use it makes The Space a physical embodiment of the kind of classic “make do with what you got” attitude.

Franklin was busy at work with Eric Harris, the guitar player and singer of The Erectors and Culinary Arts student at SBCC, making their demo to be submitted to the Associated Student Board’s Battle of the Bands, which will take place on Thursday, February 24 at The Hub—it’s free, so be sure to check it out.

The Erectors’ cramped, self-made “recording-studio” is so packed with equipment that the door only opens a few degrees before banging up against something. The walls are lined with posters of classic bands like Led Zeppelin along side old rugs and shredded pieces of mattress foam in an attempt to create some kind sound insulation.

The sight is reminiscent of the legends we hear about successful musicians who struggled before making it big. The basement that White Zombie once lived in, back when they were barely surviving on peanut butter, could have looked and felt just like Cody and Eric’s set up in Room 6. The spirit is there, that willingness to scramble and sacrifice for something you love.

The Space has a long running history of being a “hive” of jam-shacks. Bands pioneered the units to be used for practice in the 1980’s, and The Space has since spawned some fairly successful groups. Among the original visionaries who saw its potential as a practice area were the members of a hardcore punk band formed in 1982 called Rich Kids on LSD (RKL). The young bunch of music junkies stumbled on the location and approached the owner, a man known as “Cricket,” who allowed them to make use of it.

Signs of the RKL’s presence can still be found as Jesse Youngblood, a member of the band The Groms, pointed out.

“If you come inside our unit you can still see some faded lyrics that RKL had written up on the ceiling in like 1982, before getting signed,” Youngblood said.

The Space was also home to a current rising act in music: the Santa Barbara based reggae band Rebelution, who is soon releasing its second studio album and have been playing in big-name festivals across the country for the past few years.

“Rebelution used to practice here all the time before they were signed. They tour a lot now, but actually still come here sometimes, when they’re in town, and we’ve heard them practicing just a few doors down before,” he said.

The Space also houses a band called Dante Elephante that has been featured in The Independent and recently won second place in a downtown Santa Barbara Battle of the Bands. Dante Elephante members shifted their focus to playing at UCSB’s Freestyle Extravaganza Concert on Friday, February 4 in the Events Center. Other notable names include Boom Box Orchestra and The Internets, who frequently play downtown and in IV.

If you are at all curious about joining a band, renting a space for your own project, finding a band to play at your next party, or maybe just becoming a groupie, then head down to The Space where you’ll find a flurry of eager talent ready to rock out.