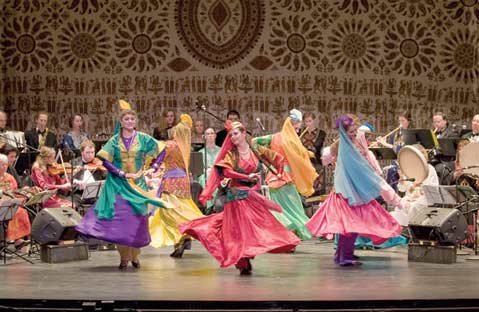 UCSB’s Middle East Ensemble treated an audience at the small but spry Song Tree venue in Goleta on Saturday, January 8.  After a short introduction by the host, the musicians exploded into a rolling Egyptian rhythm, with the tabla drummers’ hands talking in waterfalls of merriment and the violinist tearing into a syncopated, ferocious melody.

The ensemble is an eclectic group directed and founded by Ethnomusicology professor Scott Marcus.

The first piece of the night was not a love song, which Marcus explained was unusual for Egyptian music. Instead, the piece was intended to evoke the feeling of spending an evening with the best of friends. A call-and-response chorus was repeated at intervals throughout the song, drawing the audience into this close circle through participation.

The ensemble’s percussion section has been directed by tabla player Susan Rudnicki since its formation in the fall of 1989. When she first found her instrument of choice, Rudnucki said she immediately felt a magnetic attraction and has been in love with the music and percussive style ever since.

“The songs are never played the same way twice,” she said during intermission before hurrying back excitedly to play in the second half of the concert.

During the course of the evening, the ensemble played several more traditional songs from Egypt and Persia. Occasionally, choreographed dancers, all flashing smiles with jewelry jangling and skirts fluttering in all bright colors as they turned with grace and cantered exuberantly along with the music, would complement the ensemble.  These three women moved and weaved in sync with each other as the audience tapped feet to the outlandish rhythms.

Matt Wright, an ‘Ud player in the ensemble, began his musicianship as a guitarist, but when he was exposed to the music of the Middle East, he was drawn to it.  Indeed, he played a mean solo on the fretless instrument as a lead-in to one of the songs in the second half of their repertoire.

Other musicians also graced the audience with solo performances as introductions to pieces. One soloist, Professor Marcus’ son Ziyad Marcus, performed a skillful tabla solo that showed off a variety of complex rhythms and the drum’s wide range of timbre and pitch.

Another member, Melanie Hutton, sang a traditional Tunisian art song, with a beautifully light voice and strong but wavering melodic lines, smiling back at the musicians every few moments in an apparent display of mutual appreciation.

The quality of closeness was constant throughout the concert, as if the entire group was journeying together, walking unhurried across some great expanse and making music all the way to step in rhythm to.

The most engrossing performance was the solo on the santur by Bahram Osqeezadeh.  Osqeezadeh meekly approached the small stage for the final song and set up his instrument, which looked somewhat like a complex hammered dulcimer. He gently began an exceedingly beautiful, complex, and passionate instrumentation which was at turns mournful, terribly uplifting, and aggressive, but always consumptive.

This reporter failed to take notes during this section, and will admit to having no idea of the duration that Osqeezadah spent playing. The music took my mind away to a different place, where there were only mallets raining down on a million strings at a frightening speed but also with such control as to make time-keeping thoughts nonsensical.

The ensemble finished off the musical set with an exciting and catchy tune which made great use of all of their combined enthusiasm.  It was a beautiful show, and the performance was perfect for college students who are tired of being “high like a G6,” and who are looking for music that is truly interesting, masterfully executed, and enthusiastically and infectiously embodied by its performers.