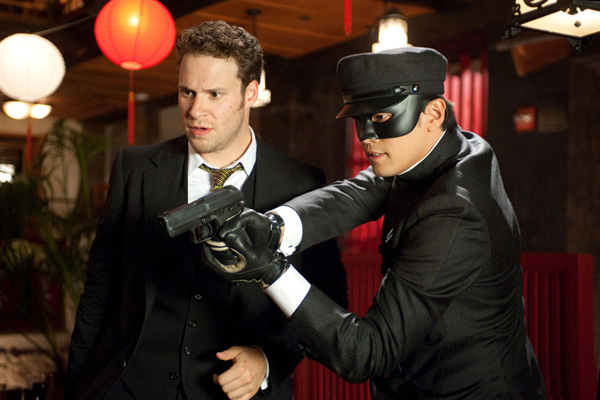 Shape-shifting over 70 years from radio, to pulp fiction, to television, and now to film, The Green Hornet finally peaked in commercial success on Friday, January 14 with the Hollywood adaptation starring Seth Rogen.

Michel Gondry (Eternal Sunshine of the Spotless Mind) directed the film. The movie stars Taiwanese pop star Jay Chao as Kato, the faithful sidekick/mechanic/crime fighter extraordinaire, portrayed in the 1966 TV show by none other than Bruce Lee. In the movie, he can warp time during his fights and make some mind-blowing coffee.

Although the action is entertaining and the humor spurs a few laughs, the script is ultimately uneven. Its commitment to plot development and characterization is superficial. Glimmers of a better movie exist, but quickly fade against the backdrop of inane dialogues, explosions, and Rogen’s bumbling antics (similar to those of any of his past characters).

Though the billionaire, mess-up act is an important part of the movie, it gets old fast and ends up as a half-homage and half-parody of the vigilante, neither half-satisfying. The main character’s incompetence (reminiscent of that seen in Hong Kong Phooey) forms an interesting contrast to Kato’s deadly skills. Thematically, it is important that the sidekick outshines the hero. But Kato pretty much holds up the rest of the film, despite Chao’s stiff acting.

One of the disappointing things about the movie is the lack of redeemable qualities in the main character. The only good thing about the characters’ interactions is an amusing fight scene.

Christoph Waltz (Inglorious Basterds) plays crime lord Benjamin Chudnofsky, which seems to be a watered-down, humorless version of his grim, more gripping role as Colonel Hans Landa. Cameron Diaz is also in the film as Rogen’s secretary. Her awkward, space-filling character grows tiresome to watch, as she has the appearances of Iron Man’s Pepper Potts but none of the personality.

With the great trend of comic book adaptations, we’ve seen vigilante movies done right. We’ve also seen some that take themselves so seriously that they’re only laughable. At least The Green Hornet bypasses that heavy-handedness. The leading actors are always having fun.

Ultimately a predictable, cardboard action flick and hit-and-miss screwball comedy, The Green Hornet has some interesting ideas for its masked avenger but suffers from a mediocre script.