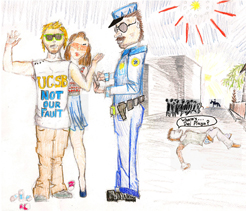 It’s Friday night, and we’re in Isla Vista. Let’s take a look around: there’s busted glass across the street, people yelling, looking for a fight, girls with the most ridiculous dresses and 12- inch heels, dried cakes of vomit, and two tottering fellows urinating in the shadows. There’s an ambulance outside a neighbor’s house and someone who thought he was invincible is going to get his stomach pumped. Down the street, two cops are arresting a boy who’s forgotten his name.

It’s a jungle out here – and it’s not even Halloween.

Why are the streets of IV so out of control? Residents seem ready to blame somebody else for the neighborhood’s reputation and the mess that are events like Halloween and Floatopia. UCSB students are quick to point the finger at Santa Barbara Community College students who they say only came to party. SBCC students will counter by saying UCSB students are far more foolish because they are finally free from their parents’ reign and go ballistic.

As always, the truth is somewhere in-between. Both parties, however, have one thing in common: they are quick to blame visitors.

It’s goofy – the tendency to point fingers. Goofy and unreasonable. How are we going to make changes? We’ve got to own up. Even if it is outsiders who wreak havoc in the neighborhood, who invites them? Mostly they’re friends of somebody who lives in Isla Vista, and a host is responsible for his or her guest.

It wasn’t outsiders who stormed the beaches and ruined Floatopia – that was largely the work of locals. To point fingers without first questioning one’s own behaviors and the motivations for said behaviors is simply irresponsible and fails to address the real concerns. If we want to have a good time like the freedom – loving folks we are, we have to prove we can handle freedom, and won’t be crushed by it. We’ve got to be mature.

UCSB student Jen Houston, who grew up in San Diego, said all her life she and her friends knew UCSB as a party school-a reputation reinforced throughout her high school years. She said while UCSB has an impressive academic reputation, the emotional intelligence and networking opportunities the party culture offers are equally important tools to gain in leading a successful life. To this day, Houston said, when she tells people she goes to UCSB, they begin expounding the popular myths of the neighborhood – namely that all Gauchos drink like good cowboys ought to drink every day of the week.

We’ve built intoxication and partying to be the defining characteristic of what it means to be a Gaucho. It’s incredible, in a way, that this is the reputation of the school. We were voted the 32nd worldwide most prestigious campus by Academic Ranking of World Universities. We have renowned programs in arts and sciences, and several Nobel laureates among our faculty.

Yet all this pales in comparison to Halloween.

During this weekend, the streets are packed and nearly impossible to navigate. The police come in on horseback to try to manage the festive throngs, and inevitably people are arrested, hospitalized, and the weekend is chocked off as one of infamy.

Josh Cataldo, who has served on IV Park Board in the past, said to blame others is the “natural default.” Cataldo describes the dominant attitude amongst the student population as one of teenagers seeking freedom by rebelling against authority without taking responsibility.

So who’s to blame? One and all. It is easy to shoulder responsibility on to somebody else, but really, we shape our environments more than we let on. If we didn’t want to live the way we do, we wouldn’t. So party on – and take responsibility.