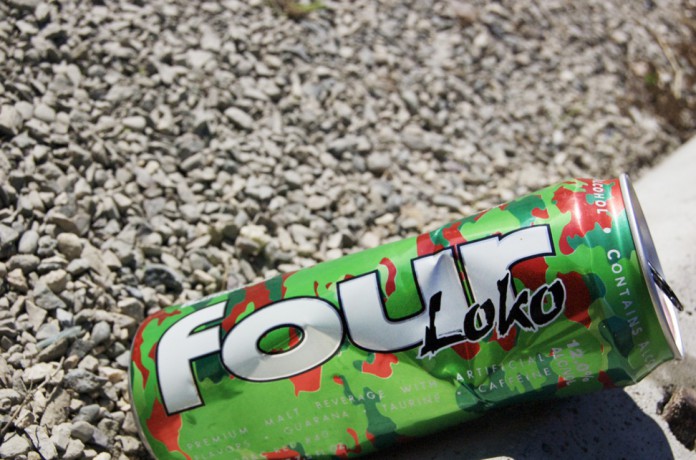 Like other drinks loaded with caffeine or alcohol, the alcoholic energy drink Four Loko found its way to popularity amongst the college students in Isla Vista. As popular as they may be, there have been rumors concerning the ban of Four Loko in the United States due to its dangerously unhealthy combination of caffeine and alcohol.

The four main ingredients in Four Loko are caffeine, alcohol, taurine, and guarana.

The initial combination of alcohol and caffeine is harmful enough to the human body. Caffeine, a stimulant, can increase heart rate and blood pressure, causing palpitations, while the alcohol, a depressant, slows the normal function of the central nervous system.

Mixing alcohol with energy drinks sends mixed signals to the nervous system, which may lead to cardiac problems. Currently under investigation by the Food and Drug Administration (FDA) due to health concerns, Four Loko runs the risk of becoming illegal in the U.S. Phusion Projects launched Four Loko in 2005. According to representatives from several liquor stores in Isla Vista, there has been a recent increase in the amount of Four Loko products sold.

Nikki Price, the cashier of Six-Pak Shop, said, “It’s definitely rising in popularity. Just a moment ago, some guy walked in and bought seven cans of Four Loko.”

Although the combination of ingredients in Four Loko is noticeably detrimental to one’s health, college students generally search for inexpensive, yet effective alcoholic drinks that suit their college budget, and Four Loko fits the bill.

“I know Four Loko is bad for you. I only buy it because it’s cheap and it gets the job done,” said UCSB fourth year Brandon Willis.

Students also drink the alcoholic energy drink because of its sweet, fruity flavors. The trendy, appealing packaging of the Four Loko cans also suggests the innocuous fun of the drink.

But according to Michelle Kitson from the UCSB Alcohol & Drug Program, mixing caffeine and alcohol together is usually not the best match.

“They’re [caffeine and alcohol] both diuretics, so they double the amount of dehydration,” said Kitson.

Four Loko drinks are a health concern, which is why some states and several colleges have already decided to ban it. But Kitson believes that banning the drink may not be the best solution. Instead, she advises students to simply be aware of the health risks.

“Just realize how much six drinks would normally affect their [students’] bodies and take that into consideration,” said Kitson.

Surprisingly, the news of the potential ban of Four Loko did not have the expected negative impact on the students of IV. Rather, there was a fairly nonchalant reaction from students.

“I feel that, because the health risks are not fully understood, that it’s not the worst idea to remove them,” said third year Zach Finn. “However, ultimately, like all products, it is up to the consumer whether they should drink them or not.”

While one reason to drink Four Loko is to simply get drunk, there are many different methods of getting drunk that don’t involve mixing stimulants with alcohol. Nevertheless, some Isla Vista residents do prefer to have Four Loko on the market, regardless of the health risks.

“They’re inexpensive and provide an affordable way to get ready before going out to party. I’m not a fan of the drinks, but I’d rather not see them taken off the market,” Finn said.

UCSB student Reina Tovar disagreed. “I didn’t know they might be getting banned, but I’m not surprised. I think it’s a good thing,” she said.

Students of Isla Vista, though not all loyal consumers of the drink, would rather have Four Loko on the market than not have the option to buy it at all. The most common remark from Isla Vista residents was that banning the drink was absurd. As harmful as the drink may be, many students agree that consumption of Four Loko should be the consumers’ prerogative.