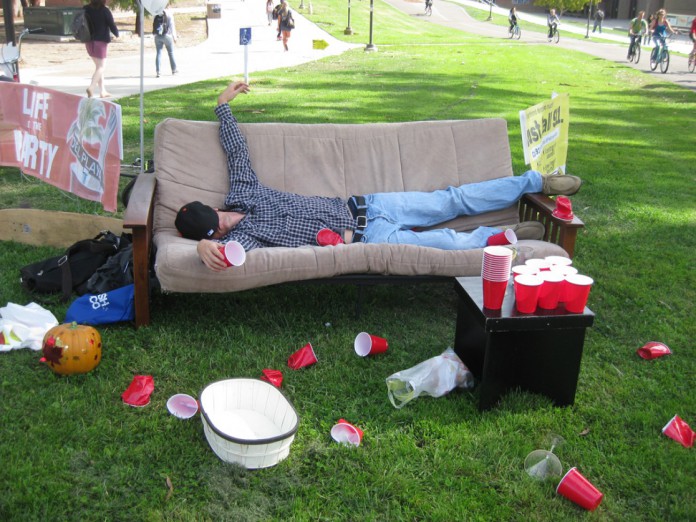 As hundreds of students rode by on their way to class, one man was passed out on a sofa, surrounded by crumpled red cups, empty margarita glasses, and a bucket to catch the inevitable chunks he felt surging up from his stomach.

This scene in broad daylight on Wednesday, October 27th at the SRB bike circle, was created by the Life of the Party and Just Call 911 interns as a way to bring attention to what happens all too often on Friday and Saturday nights or mornings in Isla Vista. The reenactment of a party gone wild was an attempt by the interns of these campaigns to highlight the symptoms of alcohol poisoning, and what people should do in that situation.

The reenactment was strategically staged before the huge Halloween weekend, when undoubtedly more than a handful will experience negative consequences from alcohol and drug use.

Caitlin Young, one of four paid interns for Life of the Party and Just Call 911, said this scenario is applicable to every weekend in IV, not just the highly anticipated ones.

“We wanted to do this before Halloween, but it’s still something someone would see on any Friday night,” she said.

Both campaigns are set up from UCSB’s Alcohol and Drug Program. Life of the Party aims to reduce the negative consequences of drinking and encourages responsible behavior, recognizing that college alcohol consumption is inevitable.

Just Call 911 focuses on the symptoms of drug and alcohol poisoning, and emphasizes the need to call for help if students exhibit any of the signs of an overdose.

Both campaigns started in the 2009-2010 school year in response to the five alcohol and drug-related student deaths the prior year. The success of the campaigns is notable— there have been no subsequent deaths since the programs launched.

Michelle Kitson, advisor for the groups, said that between the beginning of Fall quarter and November 1st of 2009, there were 55 Emergency Room visits for alcohol and drug-related illness or injuries. This year during the same span, there were 85. Kitson attributes this increase to the success of the Just Call educational campaign.

“There are not necessarily more people drinking. Instead, people are making appropriate calls when their friends are injured or have alcohol poisoning,” Kitson said.

Both campaigns plan outreach events to help local students, and are constantly trying to spread their message of safe behavior. Kitson discussed the groups’ ongoing promotional efforts to get out the facts.

Every Monday there are prize give-aways for the Just Call 911 campaign. The first five students to arrive at a designated location listed on the group’s Facebook page receive a gift card to various eateries around IV, or the campus bookstore. Students must show their Just Call 911 neon yellow key-tag, which has quick references for signs of drug and alcohol overdose, to claim their prize. Last year, 7,500 key tags were distributed.

Both campaigns collaborate with other student groups, such as the STAR (Students Teaching Alcohol and Drug Responsibility) interns, as well as Associated Students, particularly for Halloween.

The newest project, to be released sometime in the next couple of weeks, is a quick reference guide that the campaigns hope to see distributed in every dorm room and household in Isla Vista. A.S., Community Affairs Board, Isla Vista Community Relations Committee, and the Residents Hall Association all helped fund the project. Young says that these guides will hopefully eliminate any hesitation people may have in calling 911 when in trouble.

The guides debunk common alcohol and drug myths and also list consequences of engaging in the substances.

These two groups have been working hard to create significant change in the partying culture at UCSB by shifting it to safer, more responsible behavior. Because of their efforts, the student body is better informed of the risks and side effects of drinking and drug use, and the community has seen positive results.