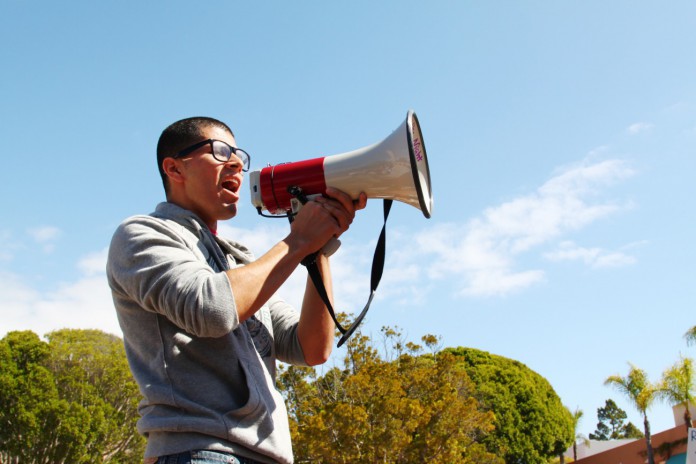 “Whose university? OUR UNIVERSITY!”

Cries for the defense of public education rang across the UCSB campus on October 7 as students, faculty, staff, and workers joined together in an effort to raise awareness about student fees and the California state budget.

The October 7 Day of Action was a statewide mobilization effort to encourage California’s legislators and members of the UC, CSU, Community Colleges, and K-12 education communities to protest the laying off of university workers, the downsizing or cutting of academic departments, and the continual increase in student fees.

David Preciado, a fourth year Chicano/a studies major and Co-Chair of the Student of Color Conference, addressed a crowd at the Arbor about recent hate crimes against the queer community, the racial profiling of immigrant workers, and the importance of higher education for society.

“We need to vote on November 2 in higher numbers than the 2008 Presidential Elections, elect officials that represent us and DEMAND us to be a priority,” Preciado said. “We need to challenge the conservative, neoliberal discourse by speaking up and publicly denouncing racist, sexist, classist, and homophobic manifestations.”

Student organizers, donning red apparel to protest the bleeding of California and the death of public education, led a march from the Arbor through the Multi-Cultural Center and University Center, eventually ending in front of the Student Resources Building.

Tabling for voter registration and various measures on the November 2 ballot awaited the crowd at the end of the march, as well as more faculty and student public speakers. Student organizers  Jaret Ornelas, a fourth year Spanish and Chicano/a studies major, and Norma Orozco, a first year Spanish and Global Studies Major, also helped design the rally so that it was not only a place for students to vent their frustration, but also a place where they could do something about it.

“I hope students realize how real this all really is, the budget cuts and the future of public education,” Orozco stated. “I want students to quit being passive, to quit believing they have no voice.”

Ornelas agreed with Orozco. “During a budget crisis, when the state spends around $52,000 per prisoner and $7,000 per student,” said Ornelas, “one must ask if spending more tax money on incarceration instead of education is the best investment.”

While protesting outside the Student Resource Building, Sarah Cline, the President of the UCSB Faculty Association and a professor of Latin American History, drew the crowd’s attention once again to the obligation the UC system had to students as a public institution.

“The University is no longer a public good, but a private privilege,” said Cline.

Associated Students President Paul Monge-Rodriguez demonstrated his own solidarity for public education as a public speaker and protester against the student fee hikes. Monge-Rodriguez asserts it is essential for AS to be involved in the organization and mobilization of students for events like the October 7 rally in order to preserve the University of California as a public institution.

“Our strength is not in the number of people that we are able to turn out to a rally, but in our ability to make students aware of their own power to shape the future of this university,” said Monge-Rodriguez.

Doug Wagoner, the External Vice-President of AS., was also present throughout the rally for higher education and participated as a crowd member.

“Every time a student makes an active effort to address the fundamental issues of de funding and privatization of public education, that is a success,” said Wagoner. “While we experienced a 32 percent fee increase in the last year, we have seen our fees increase by 300% since 2001.”

Professors, maintenance workers, and Democratic candidate for State Assembly Das Williams all spoke during the demonstration in front of the SRB, acknowledging one another as partners in the struggle to maintain a public higher education system. Although there was a substantial crowd present throughout the rally, Cindy Hernandez, a fourth year Sociology and Chicano/a studies major, questions the considerable amount of apathy and inaction within the rest of the student body.

“So many students just sat in the Arbor or the lawn and just watched,” said Hernandez. “I feel that if you know someone you care about being affected by this situation then that should be enough incentive to want to rally and protest.”

Nicole Leopardo, a third year Political Science major and Vice-President of the Campus Democrats, said the October 7 rally fulfilled its purpose as an informative and pro-active protest that encourages the participation of UCSB students.

“People’s voices need to be heard in the beginning of the year, not the end of spring quarter,” said Leopard. “It’s important for people to work together and get people to the polls.”

“It brought a lot of people who would normally not be there together,” said Quinn Nguyen. a fourth year Political Science and Global Studies major and one of the  UCSB Coalition organizers for the public education rally. “The general message was that students on campus really do care for their education and are willing to make noise and fight for it, and we are not going to stop. “