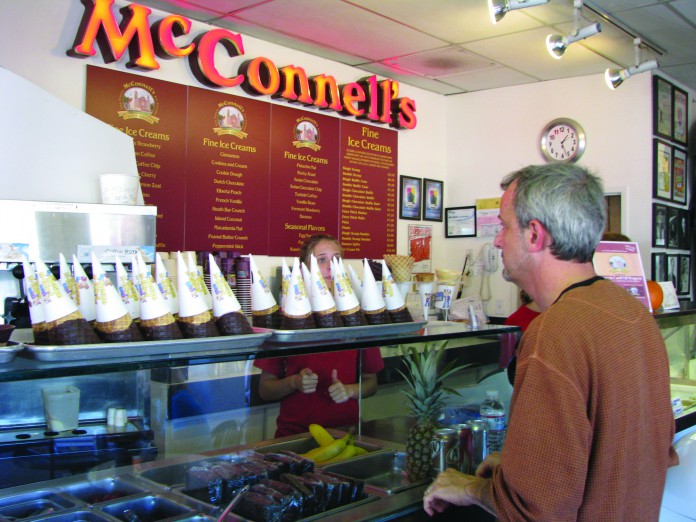 10-10-10 is a National Day of Action put on by 350.org, an organization dedicated to reducing our atmosphere’s carbon and finding sustainable solutions for the climate crisis. This day was a follow up to last year’s Day of Action, which focused on drawing attention to the startling levels of carbon dioxide in the air and the need to reduce it to 350 parts per million (hence the name of the organization). On October 24, 2009, 5,200 rallies and demonstrations took place in 180 countries, according to 350.org’s website, and CNN referred to it as “the most widespread day of action in political history.” This year, the organization aimed to create real change in addition to raising awareness about the climate issue. The organization registered 7,347 events in 188 countries that focused on working towards a greener future—tree plantings, community garden construction, solar panel installations, and more.

Students at UCSB embraced the Day of Action with the second-annual Carrot Mob, in which a business agrees to turn extra profit towards green retrofitting in exchange for added business from local community members. This year, UCSB’s Environmental Affairs Board, which administered last year’s Carrot Mob, teamed up with Santa Barbara’s Community Environmental Council and Loatree, as well as a number of other environmentally-oriented organizations, to sponsor the Mob at McConnell’s Ice Cream shop in downtown Santa Barbara. Community Environmental Council defines Carrot Mob as a “reverse boycott or ‘buy-cott’ — a day in which customers are asked to ‘mob’ a pre-determined local business to encourage or thank them for doing something right.”

EAB co-chair Andrew Dunn explains the meaning behind the event: “Carrot Mob comes from the old proverb that there are two ways to lead a donkey—with a carrot or with a stick. Basically, you can get people to do something by either negative or positive reinforcement. So, if you want to encourage a business to become more eco-friendly, you can make laws that force them to change their practices and then punish them if they don’t, or you can initiate change by bringing the community together to help the business implement responsible decisions.” EAB leads an entire working group on sustainable business, which aligns directly with the intent of Carrot Mob.

EAB social co-chair Cati  Murillo led a group of students on a bike ride from Isla Vista to McConnells in order to bring  support to the ice-cream parlor. The 12-mile ride in 90-degree heat was worth it. “It was a hot day, and we were sweaty and tired, but we were rewarded by delicious treats and good karma for saving the planet!”

Bob Moss, owner of  McConnell’s Ice Cream, expressed his  support for the campaign. He was thrilled that he was approached with the Carrot Mob idea since he had been on the fence for a while about retrofitting the store. He notes he had always wanted to, but it is difficult to spend the extra money in such hard economic times. Moss says, “I’m an older person who has been made award of the need to support climate change and conversation. When the Carrot Mob people approached me, I jumped at the opportunity. It was a fantastic idea.” He adds that he is estimating a 25-30% increase in profit for the day, every cent of which will go back into greening the store.

Moss says that after the Day of Action, people will come in to the store to audit all his equipment and evaluate the energy usage. As of now, he spends $2,000 a month on electricity alone. He says the additional profit from Carrot Mob will most likely be invested in new refrigerators and new lighting. “I already have fluorescent light bulbs, but there’s even newer technology out there now.” He also expressed his prior commitment to sustainability, noting that the store is using biodegradable cups, has instituted a food scrap program, and uses all natural ingredients in their products.

Steven Wilson, co-chair of the Sustainable Business group within EAB and said the event was a huge success. “The turnout was excellent. The place was packed. There were five to six people working the counter and there was always still a line.” Wilson, who is also an editor at The Bottom Line, attributes this success to the collaboration of many different organizations. Community Environmental Council handled much of the behind-the-scenes planning.

Lisa Burns was an influential figure in the preparation for Carrot Mob. Burns’ professional background is in writing Environmental Impact Reports. She registered with 350.org, along with several other active community members. Burns says
she and the others met at a Community Environmental Council meeting, and chose to target their efforts towards a retail business.

McConnell’s was eventually chosen because of the owner’s enthusiasm, and his willingness to donate the highest percentage of additional profit (100%) into greening his business. Burns says, “The great thing about McConnell’s is that it’s a local Santa Barbara business. It’s been here for 46 years. The owners live in the area, and it’s not owned by some big, multinational corporation. They use local ingredients—California cream, butter, and eggs.  It’s all simply ice cream.”

Burns says the goal is to reduce the shop’s carbon emissions by ten percent. The final count of McConnell’s additional profit won’t be announced until Tuesday, October 12, but organizers and participants are confident that the event drew enough to retrofit the shop and substantially reduce its carbon footprint.