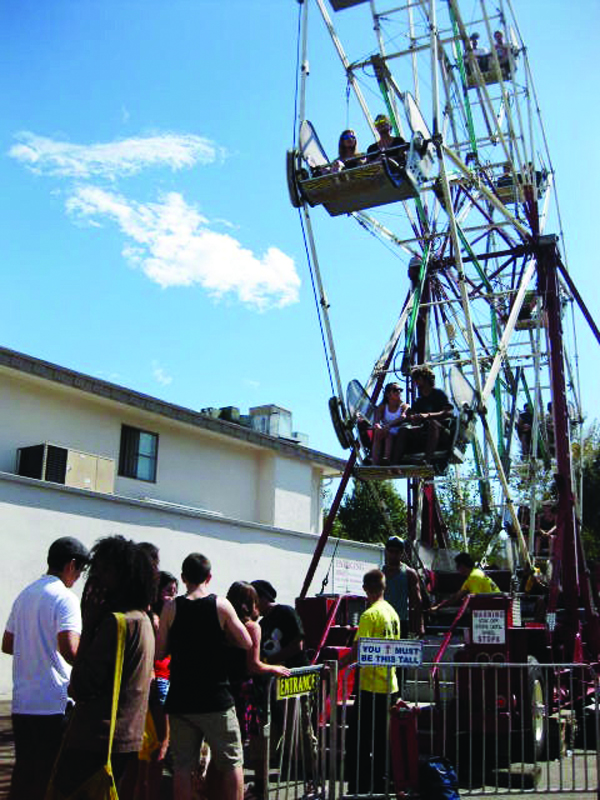 On many sunny days in Isla Vista, the streets bustle with the usual beach cruisers, speeding cars, and people strolling along. But on Saturday, October 2, UCSB held its second annual Pardall Carnival Festival.

This growing tradition was first thought of and enforced by Cori Lantz, who is currently the External Vice President for local affairs of Isla Vista Community Relations Committee (IVCRC). Last year, her main vision for organizing Pardall Carnival was to reach out to the entire community, families and
students alike. The carnival occurred without many delays and was a success, and it will be a tradition for many years to come.

This community-building event also acknowledges everyone living in the Isla Vista community, not only students. IVCRC hopes to improve IV by reaching out to families, and they also encourage students at UCSB to be proud of being a Gaucho.

“Students might forget families live here and families feel uncomfortable or are scared of some students,” says Lantz.  “[IVCRC] wants to reach out to them and wants to let them know that we’re here for them.”

Megan Shumate, the new director for the festival this year, is currently the head of the IVCRC and has followed in Lantz’s footsteps well as they collaborated this year. Her goal was to expand outreach to even more students and families.

This year’s festival showcased over 50 organizations. Some of the groups featured there were CALPIRG, the Environmental Affairs Board, the Santa Barbara Fire Department, SB Menus, Community Affairs Board, KCSB, Students for Justice in Palestine, the Wellness Program, and this newspaper, The Bottom Line.

Clubs such as the Indus Club provided free henna tattoos in hopes of promoting their club and many businesses such as Sam’s To-Go, IV Drip, Silvergreens, the new Coffee Collaborative (what used to be Java Jones), and Woodstocks gave out free samples to participants who were triumphant in the carnival games. It also held bigger rides compared to last year, like the Ferris Wheel placed between Varsity Bike Shop and the IV Deli Mart, as well as some inflatable rides in People’s Park  just down the street.  The carnival also gave away free t-shirts for game winners.

Over 1,500 people participated in this year’s event, which is a huge success for not only Shumate, but for the volunteers and everyone who participated as well. Shumate contends that the carnival also provides an “alternative for drinking, which is a stigma of UCSB.”

For sophomore Britney Ju, the carnival was “a good way to get people who are hung-over to be productive and out of their bed.”

Natasha Sidhu, the president of the Indus club, said that because of Pardall Carnival their group has grown.

“It used to be only Indians and Southeast Asians,” Sidhu said. “It was a huge success using Pardall Carnival to get others to sign up”.

Shumate feels the carnival is more beneficial by getting freshman students to see how many groups are associated with UCSB and to get them involved.