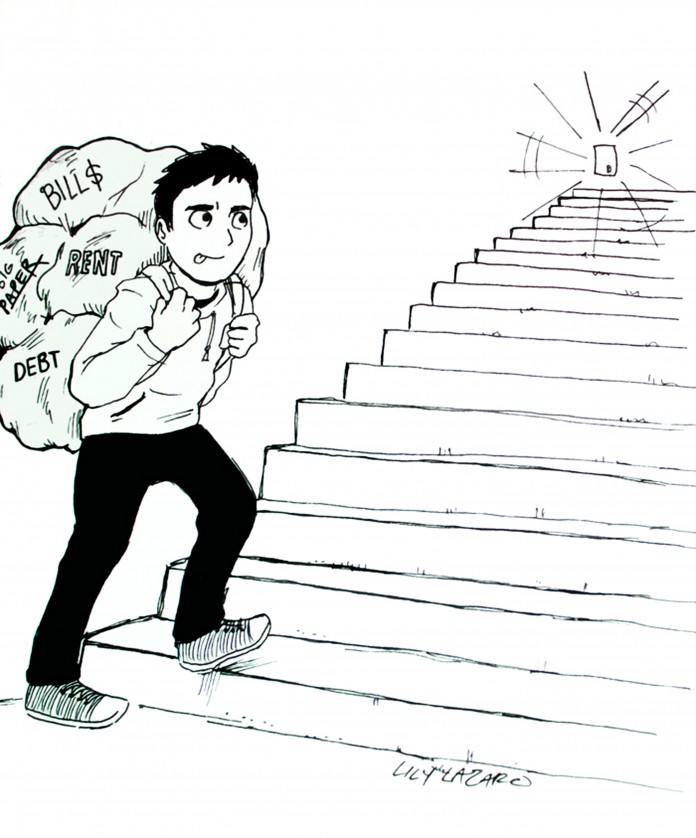 This summer I vowed to sell my soul for a job. I knew the odds were against me. I was coming home late, since the UCs get out of school about a month after community colleges, high schools and CSUs. I was only looking for temporary work since I was to return to school in September. And I had been fired from a previous job, which definitely did not make my already uncompromising resume look any more appealing.

Although I had a retail job already set up, I knew I would not make anywhere near as much as I needed to. With most of my work experience being in the restaurant business, I spent the first two weeks back home applying to literally every restaurant I could. Out of all the places I applied, at least one had to call me back, I told myself.

Despite what I told myself however, no one had to call me back, and no one did. Waiting to see the hiring manager at the last restaurant on my list, I was desperate.

My diligence finally worked in my favor, and not only did the manager and I have a lot in common, he also understood I had not been at fault for my dismissal at my last job. He told me although I was to return to school, he was willing to take a chance on me. I could not thank him enough and almost cried.

What he did not understand was by giving me this job, he had secured my ability to indeed return to school in the fall.

The University system is not cheap. It is barely even affordable for many families. I am familiar with this burden personally, because I pay for my education myself.

The importance of securing a job this summer was not for a want of extra cash in my pocket or to save up for some spring break vacation, but because the last year of school had left me dead broke and unable to return to complete my degree had I not been able to work and save up for the upcoming year.

Being a transfer student, I was able to offset some of the cost for school in paying for two years instead of four. I also had some money saved up from the years I worked prior to transferring.

Coming from a middle class family, however, I did not qualify for any grants or extra financial aid help and only had the option of taking out loans. Quite a few of them.

It sucks knowing I am going to graduate with a future of paying off debt to look forward to. A lot of people are surprised when they find out I am doing it alone. Understandably, not many students do pay for school themselves or even have the ability to.

For a long time I was very bitter about it. I was bitter my classmates and friends did not have the same stomach churning concerns to worry over. I was bitter my parents encouraged me throughout my life to get good grades and get a college degree but due to unfortunate circumstances, were unable to assist me. I was bitter that while others could go eat out, shop and take vacations, I was pinching pennies, nickels and dimes.

Summer was probably the worst. I worked almost every day, sometimes going from one job to the other as soon as I got off. I would come home at 2 a.m. some mornings physically and psychologically exhausted. My friends who stayed to take summer school would tell me of their adventures while all I had to share were things happening at work. Friends were off taking vacations and I was trying to pick up extra hours. And while people were sympathetic, I did not feel like anyone could relate to me.

Over the past year, I realized sitting around feeling sorry for myself and whining about how a 21-year-old shouldn’t have to carry such a debt was not going to get me anywhere. No money tree was going to grow in my backyard and I could handle the situation like an adult or grow resentful.

A good friend who also graduated school with some considerable debt consoled me by saying, “Wouldn’t you rather be in debt for a degree that will help you get a job to pay off that debt, instead of being in debt for a car or house that won’t do anything for you in return?”

She was right. And I know my parents love me, support me and would help financially if they had the ability to. They have been able to send me some money when I’ve asked and paid for things here and there along the way.

In the end, I always remind myself how much worse off I can be. After the recent budget cuts and tuition increases, I knew several people who were unable to return to school because they or a family member had lost their job. Others saw a decrease in or lost their financial aid altogether.

And although I had to miss out on a birthday trip to Vegas and the ability to lighten my school load by taken summer classes, I was able to return to school and it looks like I am on the track to graduating in May with a crowd of proud and excited family, for I am the first of twelve grandchildren to graduate college.

In addition, it has really been a test of character and a good lesson to learn. I’ve learned how to pursue what I want and make it work out. I am determined to get good grades not only because I care about school, but because I’ve invested my own money into it.

Life is rarely easy and one can’t expect things to be handed to them. I’ve grown and definitely would not be the same person or have the same admiration and empathy for people going through similar trials had I not been there myself.

This year is going to be another tough year and once again I’ll be back at square one afterward.

However, I’ll be one step closer to my future with a degree under my belt, pride for my accomplishments and respect from others who have seen me struggle.

While I could brag and take credit for what I’ve accomplished, I have realized I really am blessed and could not have done it alone had it not been for friends, family and a few prayers.

I can’t wait to hold that degree in my hands – the accumulation of all my hard work and effort.

It’ll be my proudest possession hands-down, and my most expensive.