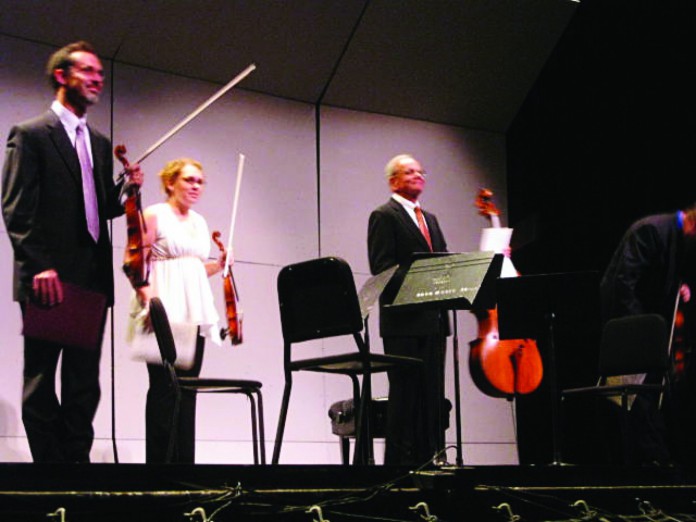 The Lotte Lehmann Concert Hall was filled with the deep melodic tones of a string quartet and piano on October 14. “A Musical Offering,” however, was not just an ordinary concert. Dr. Walter Kohn, the founding director of the Kavli Institute for Theoretical Physics and UCSB Noble Laureate of Chemistry, and his wife, Mara Vishniac Kohn, sponsored the show in remembrance of Kohn’s parents and as a gift to our community.

Khon’s parents, Salomon and Gittel Kohn, were placed in the Terezin Concentration Camp with composer Viktor Ullmann. According to Kohn, 10,000 people died while imprisoned at the camp. Kohn honored their struggles by dedicating this concert to the memory of his parents as well as to Ullmann.

“My parents, Salomon and Gittel Kohn, were in the Terezin concentration camp with Viktor Ullmann. I would like to think that they heard some of his beautiful music,” said Dr. Kohn.

Successful cellist and member of UCSB music faculty Geoffrey Rutkowski said that the purpose of the music was to paint the picture of this unfortunate event through the songs of the composers.

The composers whose music was showcased in the concert include Johann Sebastian Bach, Alban Berg, Viktor Ullman, Gaspar Sanz, Sebastian Iradier, and Celedonio Romero. The music started off as dark and dreary, which alludes to the people in the death camps solemnly marching to their deaths.

Samantha Topuzes, a first-year, described the intensity of the performance. “It [the music] illustrated the suspense by paralleling it to the Holocaust and the concentration camps.”

However, the music began to change after the intermission. Just as the reign of Hitler and the Holocaust diminished, the music changed to a more happy and triumphant tone.

The audience was diverse, as it ranged from distinguished UCSB faculty, talented musicians, and students. Kirsten Homing, a first year student, was required to attend this concert for her Music 15 class. She was able to apply concepts she learned in her music appreciation class to the performance.

“I was pleasantly surprised that I was able to recognize the music and the composers because I wouldn’t have known anything three weeks ago,” she said. “ I also appreciated the fact that it was free, which allowed me to attend it and broaden my horizons.”

The music of all the composers perfectly summed up the emotions of war—pain, love, and triumph—in one sitting.