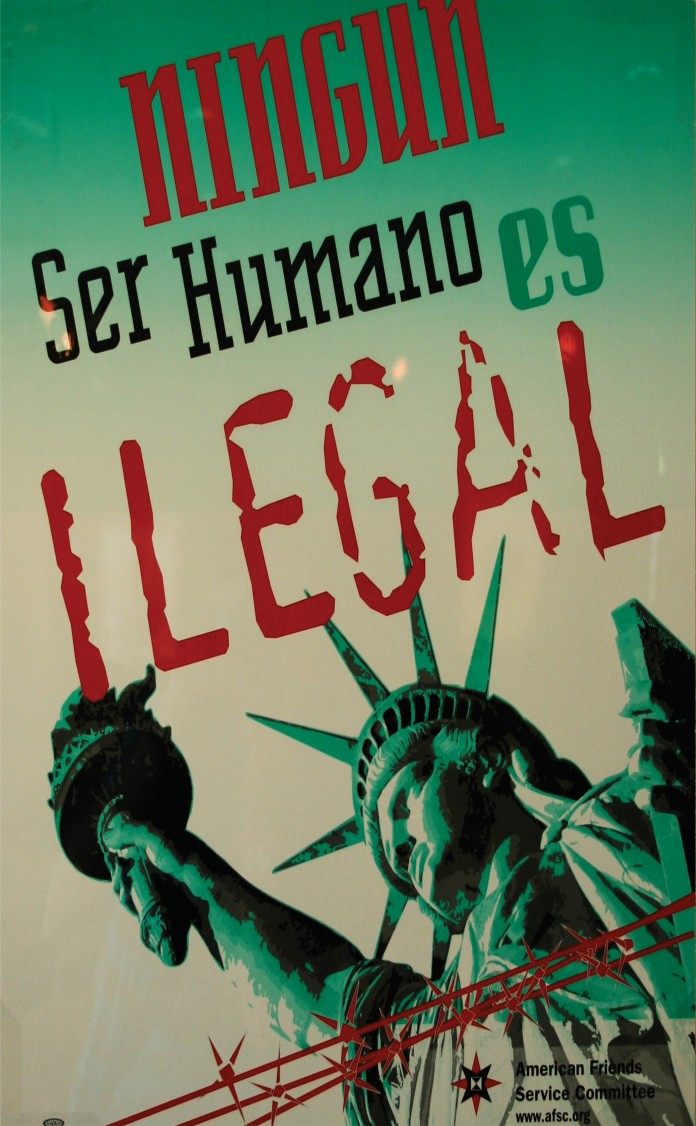 In a land that was built on the idea of freedom from injustice, how can any human being be categorized as illegal? This is a question addressed by the poster exhibit currently in the Multicultural Center (MCC) that opened this past Wednesday and will stay up until December.

This collection of rectangular framed images portray the explosive issues of immigration and racism that sometimes seem  out of control. This exhibit is not just a portrayal of beautiful works of art- it is a political statement that expresses in exploding colors that those people who stand up in protest against what they perceive as injustice make a difference.

Viviana Marsano of the MCC staff hopes that the exhibit will show students that there are two sides to the issue of out of status persons in the United States.

“On the one hand we have students of immigrant parents whose experience has been and still is pretty much what you see depicted on the posters,” Marsano said.

“On the other hand there are students who  probably cannot relate to that experience but can learn a lot about the struggles immigrants have always faced in this country from the 19th century on.”

Marsano also said that the mass production of images and media can be used both to support as well as denigrate immigrants.

“In a few seconds you can organize hundreds of people to attend an event as well as to participate in a protest against a controversial issue, personality or law,” she said.

“[But] technology can be used as a venue of propaganda to vilify a certain person or groups and to manipulate information.”

The poster entitled “These Hands Care For Your Children” is a protest poster from Los Angeles addressing Proposition 187, formally known as the “Save our state initiative,” which cut off all funding for undocumented people in California. The poster says that undocumented people are the ones who operate our machines, pick our food, sew our clothes and care for our children.

This law was passed in 1994 and was protested by the Latino community, religious leaders and other minorities, community organizations, and groups of college students. The law was upheld until 1998 when most of it was declared unconstitutional.

One of the posters used to protest Prop 187, “FRAID Anti-Immigrant Border Spray,” is a political cartoon set up to look like an advertisement for anti-immigrant spray. It has a catchphrase: “The Spray that 9 out of 10 racist politicians prefer.”

Another example of a protest poster is the famous photograph taken in Warsaw of Jews being arrested by armed Nazi Troops.  This poster used in response to the anti-immigrant sentiments that escalated after September 11, 2001.  It is entitled “Warsaw 1943 Never Again.”

The oldest of the posters on display is a poster protesting the lack of recognition of the Chinese immigrants who built the U.S. transcontinental railroad. The newest is entitled “Arizona White Supremacy,” and was made in protest to the Arizona Senate Bill 1070 that was recently passed.

Arlinda Sheffeield, who works at the MCC, said that racism is still alive today.

“Racism is not dead,” she said.

She also said that we, as citizens, do have power in our government and will get our voices heard and progress will be made because of it.

On October 12 at 5pm there will be a discussion about the Arizona Senate Bill 1070 in the MCC.